Spain and the World: Aspects of the Spanish Revolution and Civil War (4)

Workers’ control in the Spanish Revolution 1936


The Army mutiny in Spain in July 1936, and the resulting 3-year civil war, had a few positive effects. Well away from the fighting, in the cities, towns and countryside, thousands of anti-fascist committees were set up; thousands more workplaces were occupied and work kept going. The collectivised workplaces were run by workers’ committees, or Comités, and we give two examples below - a major transport system and a health service.

Barcelona Tramways
Perhaps one of the best examples of socialisation was that of the Barcelona Tramways, described extensively by the major book on the collectives. It covered trams, buses, underground, taxis and two funicular railways, and 7,000 workers of whom 6,500 were members of the CNT*. After the military coup there were 600 operating trams and many of them had been used in the street barricades, ther was also extensive road damage and the main company's offices were guarded by Civil Guards. Armed workers saw off these troops and found the building deserted except for a lawyer left behind to parley. This man was well known as he had led the prosecution two years previously of workers’ leader Comrade Sanches, which resulted in a 17 year sentence. He had demanded 105 years for the crime of heading a 28 week strike! The workers wanted to shoot the man on the spot but Sanches opposed
that and even arranged for an appointment the following Monday and an escort home. Predictably he was never seen again.

Workers get organised
The Comité of seven called an immediate meeting of delegates from various sections - the power station, repairs, cables, traffic, conductors, stores, accounts, offices, etc. The workers were in control and began organising. A radio broadcast recalled all workers committed to the new operational setup. Company engineers accepted the authority of the Comité, including a former colonel who had been victimised for supporting the union. 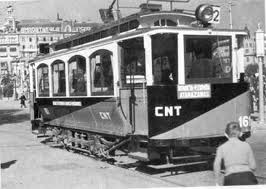 As a result of day and night working to repair old tramcars, instead of using trailer-cars to extend capacity - a practice that had caused many accidents - there were 700 trams on the road five days after the fighting, 100 more than before. The vehicles were all repainted in the red and black colours of the CNT/FAI**. Other technical improvements included the replacement of 3,000 awkward metal support poles by aerial suspension, a new safety and signalling system, a new electric furnace, milling machines and electrode welding sets.

The new system worked well. Each section was headed by a workers’ representative and an engineer, both nominated by the Syndicate. Every decision was approved by the Comité. Assemblies were held on sectional issues and a general assembly ratified major points, like one to carry out the additional repainting without overtime pay. At one assembly, efforts were made to get the hundreds of shareholders to attend but only one middle-aged woman, who owned 250 shares, attended. She declared herself happy with the arrangements, and Leval recounts that the woman was unlikely to be deprived of her means of support.

More production
The service was substantially improved. Monthly income was 12% up on 1935 figures. 1937 figures for passengers carried went up by 50,000,000 to 233,557,506. A uniform fare charge of 0.20 pesetas meant a substantial reduction for most people. It was 20 months before fares were increased. The war and the blockade meant that internal workshop production of materials and parts used went up from 2% to 98%. All debts were paid off, and financial assistance rendered to other municipal undertakings.

Better conditions
Working conditions were both equalised and bettered. Previous day rates of 8,9,10,11 and 12 pesetas for various grades, were increased to 15 ps for labourers and 16 ps for skilled engineering workers. Wash basins and showers were installed and an occupational health service introduced. 30 district doctors were appointed to treat workers and their families. A home help service was set up to help workers who were sick. A well equipped clinic was appropriated for use of the syndicate.

There was full sick pay. Discipline at work was typical of that in other Comités. Serious cases were dealt with by assemblies, and dismissals usually became transfers. Drunkenness resulted in the pay being made to wives. An effective sanction in workplaces was the "naming" of irresponsible workers on a displayed blackboard, which presumably allowed a variety of personal responses.

Defended against State take-over
The value of the collective organisation was obviously recognised by the workers as much as the public. When the government tried to assume control of the tramways in June 37, as part of a whole scheme to take back all the utilities and public services, the workers mounted a massive campaign. Huge posters called for rejection of "municipalisation", the euphemism used by the reformists for their planned destruction of the system. All the gains itemised above were listed and such was the response that the plans were shelved.

Conclusion
The success of the tramways Comité was due to the superiority of the workers’ management and external factors. Petrol shortages meant more use of the public service and the crippling effects of the war and blockade were minimal in the industry. The old regime was conservative and reconstruction was overdue.

Health Service
We can now turn to one example involving the extension of collectivisation into social welfare, that of socialised medicine, in Catalonia initially but also other cities in Republican Spain. (This is from the same source as above, page 264.) Deriving from a Syndicate of Liberal Professions, the Syndicate for Sanitary Services, SSS, was set up in September 1936 to tackle the problem of health. Spain had high infant mortality, 18 or 19 per 1,000, and this disguised the fact that it was double in working class areas compared with elsewhere. There were many other problems as well.

The initiative was taken by CNT Ministers in the Central and Catalonian government and the resulting health service was often staffed by political members. This political lead was to become a disadvantage when the counter-revolutionary forces removed CNT personnel from 1937. This included Dr Martì Ibañez who had been Director General of Sanitary Services and Social Assistance in Catalonia, just one of luckier of the victims of the Stalinist counter revolution, who lived to tell the tale.

By February 1937, Leval writes that the SSS had on roll 1,020 doctors of different specialities, 3,206 nurses, 330 midwives, 633 dentists, 153 pharmacists, 633 assistant pharmacists, 335 preparers of dressings, 81 other specialists, numerous masseurs and 220 veterinary surgeons. In all, a total of 7,000 people to cover a Catalonian population of 2.5 m. By June, there were in Barcelona, 18 hospitals [six of which had been set up by the SSS], 17 sanatoria [9 new], 22 clinics, 6 psychiatric establishments, 3 nurseries, 1 maternity hospital and two very modern annexes to the General Hospital, one for bone TB and the other for orthopaedic treatment.

Outpatient departments were established in all principal localities and smaller localities were attached. These were adequately equipped and staffed to deal with problems. Funding for these as for other parts of the SSS was from central and local government. Operations were free in the new clinics as was psychiatric treatment.

Doctors
Doctors responded in different ways. The older-established ones were suspicious and a number left the country. Younger staff were enthusiastic generally about the new system. Previously new doctors were virtually unpaid, worked in poor conditions and waited their turn to fill dead men's shoes. Now all hospital doctors were paid 500 ps a month for three hours work a day. In addition, they could have private patients but this practice was closely supervised to prevent excesses. No doctor could receive two salaries and the widespread practice of neglecting official work for private practice was ended. A majority of staff also worked voluntarily in addition to their posting.

A series of reviews of related areas were begun. For example, pharmaceutical products were to be re-organised from laboratories to outlets. Health and safety at work was re-structured to begin an occupational health service and insurance companies’ involvement reduced in favour of State provision.

As well as the Catalonian SSS, there were a number of other health syndicates set up. Some date from 1936, like the Mutual Aid Society of the Levant in Valencia, which in fact survived the Franco years. In Valencia in February 1937 a Congress of Federations of Health Syndicates was held. These were from all over Republican Spain, over 40 in total with 40,000 staff. An important aspect of the Congress was a planned further development in organisation especially with regard to diseases like TB. This of course would involve considerations extending to housing and schools and other aspects of public health.

While not all syndicates were as comprehensive as the Catalonian model, they represent a pioneering venture into a national health service well in advance of other countries. Much of this was due to the CNT and practically nothing except funds came from government. In many cases, military personnel provided field hospitals and dealt with right-wing pharmacists. CNT generally organised evacuations from the war zone, bomb shelters and anti-gas brigades.

In conclusion, the achievements in health were far from being the version that socialists would like to see. Private practice and ownership remained, old ideas and practices were not completely removed. The constraints of war and the trade blockade imposed obvious limits. It was an experiment in un-propitious circumstances and was generally terminated with the victory of the military forces of the Right. It does represent an extension of workers’ power into social welfare, beyond the workplace limit set by anarcho-syndicalist theory. It demonstrated that workers could effective manage society as well as their workplaces.

Other ﻿chapters in the pamphlet
British imperialism and non-intervention
Writing about medicine in the Spanish Civil War
Spain the view from the East End : Joe Jacobs
Anarchist participation in the government
Previously published on this blog
Women in the Spanish Revolution