Women in the Spanish Revolution by Liz Willis

Originally published by the London Solidarity group in 1975 as Pamphlet No.48
This text utilised the version at http://flag.blackened.net/revolt/disband/solidarity/womenSpain.html (accessed 29/7/10) with some changes to details of formatting and numerous corrections to misprints/mis-scans which appear on the Internet – and, in a few cases, in earlier editions. 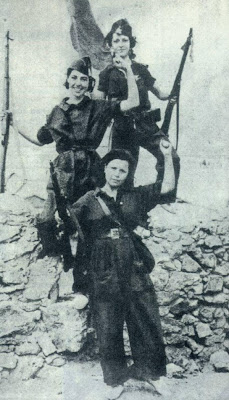 Introduction
In a way, it is clearly artificial to try to isolate the role of women in any series of historical events. There are reasons, however, why the attempt should still be made from time to time; for one thing it can be assumed that when historians write about "people" or "workers" they mean women to anything like the same extent as men. It is only recently that the history of women has begun to be studied with the attention appropriate to women's significance - constituting as we do approximately half of society at all levels. (1)

In their magnum opus The Revolution and the Civil War in Spain (Faber & Faber, 1972), Pierre Broué and Emile Témime state that the participation of women in the Spanish Revolution of 1936 was massive and general, and take this as an index of how deep the revolution went. Unfortunately, details of this aspect are scarce in their book elsewhere, but the sources do allow some kind of picture to be pieced together. In the process of examining how women struggled, what they achieved, and how their consciousness developed in a period of intensified social change, we can expect to touch on most facets of what was going on. Any conclusions that emerge should have relevance for libertarians in general as well as for the present-day women's movement.

Background
Conditions of life for Spanish women prior to 1936 were oppressive and repressive in the extreme. Work was hard, long and poorly paid (2), and when improvements did occur they were not always entirely beneficial to women. Figures from the Instituto de Reformas Sociales (quoted in S.G.Payne, The Spanish Revolution, Weidenfeld & Nicolson, 1970), show that in the decade 1913-22, men's wages increased by 107.1% and women's by only 67.9%, while prices rose by 93%. When the 1931 Republic established the eight-hour day for agricultural labourers, this meant, according to a peasant in Seville Prison who talked to Arthur Koestler, that the men could go to meetings and gossip, while their wives could return home at 5 p.m., prepare the meal, and see to the children's clothes.

Minimal reforms including maternity compensation had, however, been introduced, and featured in the aims of most progressive groups. Politically, the Republican Constitution of 1931 brought-votes for both sexes at 23, a radical departure for the time and place. At first, it has been said (by Alvarez del Vayo in Freedom's Battle), a woman's vote merely doubled the power of her husband or confessor. But the situation was being modified. The Republic brought measures of education and secularisation, including provision for divorce if "just cause" were shown. Despite the weight of internalised inferiority under which they must have laboured, many women were starting to involve themselves actively in politics. (3)

On the libertarian side, the strong anarchist movement incorporated a certain awareness of the necessity to envisage changed relationships between people. For its adherents, the abolition of legal marriage at least was on the agenda. It is more difficult to assess to what extent their personal lives embodied a transformation in attitudes, but it seems that the particular problems of women were not a priority concern. (4)

In fact they were not much of a priority with anyone. Margarita Nelkin, a Socialist who was to become a deputy in the Cortes, wrote about The Social Condition of Women in Spain (Barcelona, 1922) and Women in the Cortes (Madrid, 1931); there was a movement for women's rights in the early twenties, but it had a reformist and careerist orientation, based on women in the professions. For anarchists, a reformist, minimal or transitional programme was more or less out. The focus was on thoroughgoing social revolution. Unfortunately, any theoretical discussion of what such a revolution might involve was often out too, in favour of an assumption that things would work out spontaneously in the best possible way.

Read more »
Posted by Radical History Network (RaHN) at 11:40 AM 4 comments: Links to this post