RaHN, which had not met for some months, kicked off again this week with a well attended meeting to celebrate the Spanish revolution of 1936. The military invasion by General Franco, aided by Hitler and Mussolini, sparked off the immediate resistance of much of eastern Spain. Everyone took to the streets, disarmed the troops, stormed the barracks and prisons then occupied their workplaces in factories, depots, mines and the land. It took nearly three years of civil war to dislodge them, aided even so by the so-called helpers of the communists who also turfed out occupiers. People paid tribute to the International Brigades who went to the country to defend the people's action. In the end, the fascists won, and this became a curtain raiser for WW2 a few months later.
The speaker, Brian Bamford from Manchester, gave an interesting discourse on the events, covering various historical sources and views. Speakers from the floor emphasised what was and still is the greatest mobilization of ordinary people fighting to control their lives. There were people at the meeting from the Haringey Solidarity Campaign, some visitors from Walthamstow and two Spanish students who were able to add details about the recent big demonstrations all over Spain.
There was a good supply of literature available including the recently published book on the workers' control in this period and a pamphlet on the war from Manchester. A reprint of a booklet on Women in the Spanish Revolution had been made. The RaHN blog which has had many hits on this subject was publicized. Housmans of Kings Cross supplied a bookstall.

14 September The Closure of the Post Office. After one and a half centuries of the Post Office as a publicly owned business, it is now facing privisation with the undermining of workers' rights. Local resident Rowland Hill introduced the national system. Merlin Reader, a union representative for the Communications Workers Union, outlines the Post Office history and the current struggle.

12 October  Joe Jacobs. To celebrate the 75th anniversary of the famous Cable Street events of 1936, we remind people that Joe's magnificent struggle against the fascists is recorded in detail in a working class classic Out Of the Ghetto. Alan Woodward has written up the second half of his life after 1940 and introduces his booklet.

9 November : to be arranged

14 December The Luddites Remembered. It is 200 years since the clothing workers smashed up the machinery that was destroying their jobs. Many regard modern technology as similarly destructive but a better way is needed to deal with it this time round. We examine the prospects.

Spain and the World: Aspects of the Spanish Revolution and Civil War online pamphlet by supporters of the RaHN - click on this link
Posted by Radical History Network (RaHN) at 6:54 AM No comments: Links to this post

" Told from the point of view of Dave, a British volunteer who journeys from Liverpool to fight in the brutal civil war that engulfed Spain in 1936, Ken Loach’s masterpiece neither romanticises the conflict nor diminishes the dilemmas of individuals caught up in it.
Dave’s political journey starts out in the Communist Party. But, he goes on to fight with the Marxist POUM militia in a civil war within the civil war, in which the POUM sided with a glorious but short lived anarchist inspired revolution in the City of Barcelona, ranged against the increasingly repressive forces of Stalinism.  "

This film has attracted much controversy simply because of the May Events of 1937 in Barcelona, when a communist coup that led to the annihilation of left wing party the POUM, and severely weakened anarchist power in Catalonia. Supporters of the Spanish communists and the Popular Front government have attacked the film both for its politics and its alleged historical inaccuracy. In many ways Loach based his film on Orwell's view of events in Catalonia, and communists have been vituperative in thier condemnations of Orwell's Homage to Catalonia.(1) Another example is Martha Gellhorn, travel writer and journalist, who was with Ernest Hemingway in Madrid in 1936; both were life-long fellow travellers. She rubbished the film in a review published in the London Evening Standard on 5 October 1995. An exchange of views about the film, with both the communist view and the contrary view, can be found at the website of the Marxist journal 'What next' . A contemporary view of the events in Barcelona written by Liston Oak - a communist - can be found on this blog

Pamphlet published on this blog Spain and the World : Aspects of the Spanish Revolution and Civil War
Posted by Radical History Network (RaHN) at 9:07 AM No comments: Links to this post 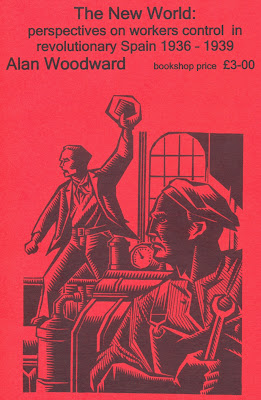 In Alan Woodward's new publication he looks at the whole tradition of workers' control, covering the libertarian tradition from the 1905 Russian revolution, and the theorists of the 1920s on to the Spanish revolution.
Looking at the Spanish revolution Alan examines all aspects of the cooperatives from transport, food production, and small workshops tothe health serivce and local government. The pamphlet is also a polemic against those socialists who are ideologically against workers' control.

It is an inspiring story of workers taking control of their own political and economic lives; as he says:


"The essence remains the same - to help the formation of a collective, open, federated, responsible society without repression by capitalism or its state. This allows maximum freedom for the individual and a fair permanent structure in which it operates. This is a New World many are seeking and your help in realising it is invited." (p65)

See also on this blog (online pamphlet):
Spain and the World : Aspects of the Spanish Revolution and Civil War
Posted by Radical History Network (RaHN) at 3:44 PM No comments: Links to this post