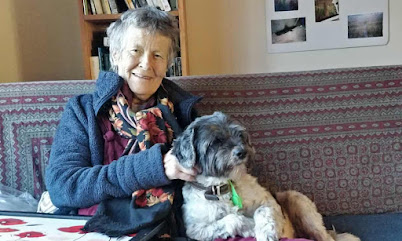 In it she describes herself as 'a human rights campaigner in the realm of learning disabilities as well as autism. Implications extend well beyond autism to an egalitarian understanding of humans of every sort.'

A poem by Dinah, some advice to the young:

Prefer the grimmest truth to glittering fake
Forget it! No-one else thinks so.
Exclusively what pleases you.
Unless it's turned to deeds by effort spent.
If something's to be done, then do it now
Why not go off and have a little treat?

Dinah was keen to leave a better world for future generations. She presented, with Janine Booth, on Marxism and Autism, followed all the news about Universal Basic Income, and participated in climate actions. Dinah was a fervent proponent of technology, working on proposals to develop software to have on tablets that could be distributed to Autists in care so that they can communicate outside and raise any issue affecting their care. Dinah often wrote letters to compliment or complain so that organizations could improve. Of course, Dinah was also very supportive of Autistic artists and Autistic Pride events; she regularly attended the Hyde Park Autistic Pride picnics and proudly sported a homemade "weird pride" badge as well as her "productive irritant" one.

Since realising I was part of the autism world some fifteen years ago, I have met many inspiring, clever, and kind autistic people – but none quite as inspiring, clever, and kind as Dinah Murray. A warm and cultured friend, Dinah would insist on serious, political conversations taking place over a delicious lunch or a pleasant walk. We presented alongside each other on several occasions, on capitalism, socialism, Marxism, autism, and neurodiversity. The general pattern was that I would give a flashy slideshow, then Dinah would follow up with some softly-spoken, brilliant insights. She knew very well that academic efforts alone would not liberate autistic people, so was active in campaigns and political initiatives to fight injustice and improve autistic lives, including attending the launch of Neurodivergent Labour in 2019 and support its work since then. Dinah was thoroughly non-judgemental and always encouraging. When the history of how we won autistic liberation is written, Dr. Dinah Murray's name will feature prominently.

Ask 'Is that so?' of every claim you make

If you imagine you're the centre of the show,

Control the urge to say and see and do

Don't laud the beauty of a good intent,

Don't say, Oh Yes it must be done, and mop your brow.

And now you've made these sentiments so neat,

Dinah was active in the High Holloway Against the Poll Tax group in the early 1990s, making their banner and attending demonstrations. In the mid-1990s she became a great supporter of the McLibel Support Campaign, and often looked after my young son so that I could focus on my work as a defendant during the long trial.

A previous post on this blog profiled several radical history podcasts which may be of interest.

To these we can now add the excellent #SpyCopsPod, with weekly instalments that have mainly focussed on the proceedings of the Undercover Policing Inquiry. All the episodes I have listened to (there are seven so far) have been excellent "on the ground" summaries of what is happening at the inquiry - as well as fascinating insights into UK radical movements of the 1960s onwards and police surveillance of them.

Contributors to the podcast include non-state core participants in the inquiry (i.e. activists who were spied on) alongside members of Campaign Opposing Police Surveillance and the Undercover Research Group.

You can find the podcast free on all the usual platforms - and there are links and more information here: 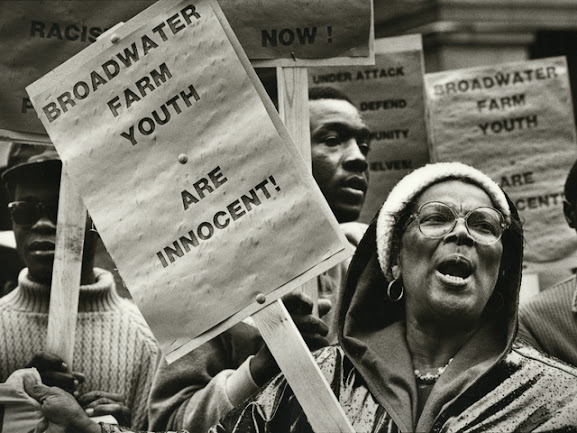 While War Inna Babylon was originally scheduled to open in May 2020 – the delay due to Covid-19 – has inadvertently made this the most timely exhibition it could possibly be.

In light of events over the past year, that have shown how little value is placed on Black lives – the Covid-19 Public Health England Review, BLM demonstrations, the Sewell washout, the increased use of police violence, and stop and search procedures against members of the Black community – we view this as the perfect time to focus on grassroots activism in Black frontline communities across the UK; which have been at the forefront of resisting state oppression and creating unfounded change for racial justice since the 1970s.

Ten years on from the UK-wide riots sparked by the police killing of Mark Duggan, this exhibition shines a light on the vast range of collective actions, resistance and grassroots activism undertaken by Black communities across the U.K in response to over seven decades of societal and institutional racism.

Using the ‘symbolic location’ of Tottenham, a neighbourhood that has received much attention in recent years due to its history of racial conflicts and heavy-handed policing; this exhibition combines archival material, documentary photography, film and state-of-the art 3D technology to ‘act as a window to the past and as a mirror for our present-day social climate’.

War Inna Babylon will chronicle the impact of various forms of state violence and institutional racism targeted at Britain’s Black communities since the mass arrival-upon-invitation of West Indian migrants in the late 1940s.

The exhibition will include original tributes from victims’ families, case studies of the controversial 'sus’ (suspected person) laws and the Gangs’ Matrix and highlights legal developments that have resulted from Black justice campaigns.

The exhibition, the first of its kind to accurately assess the conditions of Black lives across Britain, will be accompanied by an extensive public programme presented both in Tottenham and at the ICA that will include film screenings, community educational groups, talks, cultural events, performances, and a digital presentation focusing on the interrelation between artificial intelligence (AI) and racism.

Tickets will be available later in June.

Tuesday 11th May, 7.30pm: Celebration of 30 years of radical ideas and campaigning in Haringey and beyond 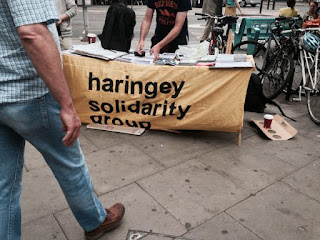 Haringey Solidarity Groupwww.haringey.org.uk Tuesday May 11th, 7.30-9.30pm - onlineA review and celebration of 30 years of radical ideas and campaigning in Haringey and beyondIntroduction/review:  Presentation looking at of some of the activities and struggles the group has been involved in over the 3 decades since the foundation of HSG on May 11th 1991.

Memories/inspiration: Those attending are invited to contribute their memories and reflections, and what lessons and inspiration we have taken from the past

Discussion: Ideas for the future

All former and current HSG supporters are invited to attend and celebrate 30 years of local radical protests, campaigns and movements for a better society that we have been part of or actively supported.  What happened, what was inspiring, what more could have been done, and what needs to be done now and in the future?

Please register: (its free - the zoom link will be sent nearer the date) -  https://www.eventbrite.co.uk/e/haringey-solidarity-group-30th-anniversary-reviewcelebration-tickets-152275465015

Please pass this on!

Note:  We are also planning a face-to-face celebration event in the Hub in Lordship Rec, N17, on Sunday afternoon 27th June - with films, food, stalls and an exhibition. Details to be firmed up.

'We Have Always Been Here': exhibition of BAME LGBTQ+ history in Haringey 1970s-1990s 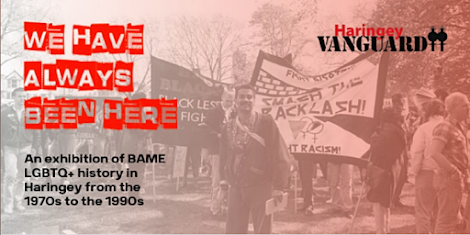 Please join us online on Friday, 26 February at 18:00 to celebrate the launch of We Have Always Been Here, an exhibition of archives, artefacts and oral histories from the Haringey Vanguard Collection at Bruce Castle Museum.

This exhibition and new website resource marks the culmination of the Haringey Vanguard Project over the last two-years, collecting and preserving the history of BAME LGBTQ+ community and activism in Haringey from the 1970s to the 1990s.

Learn about the invaluable work activists did to promote acceptance. Find out about Haringey Council's pioneering role in the UK's fight for equality. Celebrate the camaraderie and cultural pride at the heart of community life.

Please register to be sent full details closer to the event.

Our exhibition title is a nod to "We Have Always Been Here", a report authored by Linda King in 1987 to address the exclusion of BAME voices from an LGBTQ+ archive.

Haringey Vanguard was a project funded between 2018-2021 by a grant from the National Lottery Heritage Fund and led by Haringey Archive and Museum Service at Bruce Castle, supported by London Metropolitan Archives.

Hope to see you there. 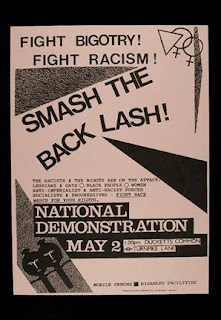 Accounts of the 2015 RaHN meeting "Out and Proud in North London" can be found here and here.
Posted by John Eden at 11:09 AM No comments: