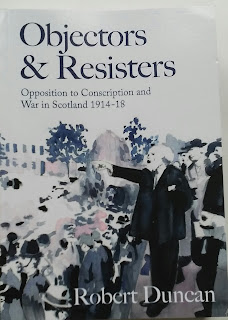 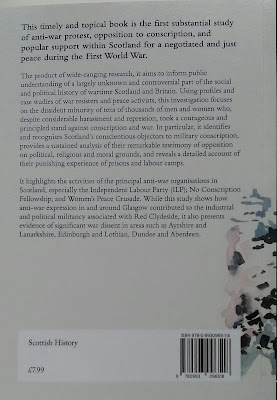 Dedicated "To all peace activists, whatever your political views".

According to the London Rebel History Calendar 2016, on 24 November 1918 a mass meeting of the North London Herald League demanded the release of jailed socialist John MacLean. His name and record of resolute opposition to the First World War will be familiar, up to a point, to many radical historians, as will several other aspects of the story told in Robert Duncan’s excellent book: the Glasgow rent strike, industrial unrest, the launch of the Women’s Peace Crusade.  It breaks new ground, however, in collating and adding to the information available on these and other topics, and deserves to be widely read.

The longest chapters are 4 and 5, dealing with conscientious objectors (COs), arguably the group whose anti-war stance cost them the most. From the Acknowledgements, the author’s work on the book was completed in January 2015, so that he would probably not have had access to the Pearce Register online. Nor does he refer to many of the secondary sources published or re-issued and updated in or shortly after 2014, which in any case tend to be rather short on information about Scotland. This means that he relies extensively on his own original research in newspapers and periodicals and often on the accounts of his protagonists themselves, providing resounding statements of principle and heartening examples of resistance.

Obtainable from the publishers - advisable to allow 2-3 weeks for delivery on recent experience. 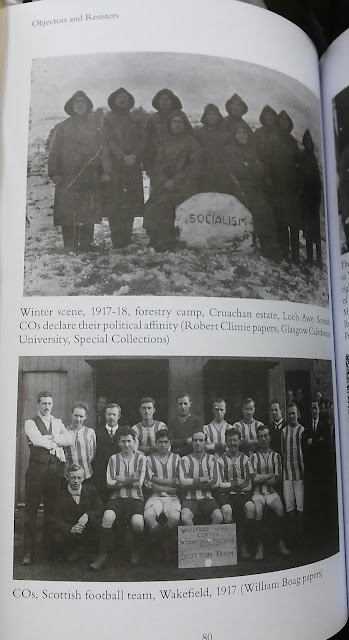 "In the case of hunger strikers, we could always feed them artificially in the last resort, but in the case of the work striker we can do nothing..."
- Excerpt from confidential Scottish Police Commissioner's report on prominent CO James Maxton in Perth prison, June 1917, on p.84 of the book.
Posted by Radical History Network (RaHN) at 1:10 PM 2 comments: Links to this post

1. Land For What? Conference
Sat, 12 Nov 2016, 09:00 – Sun, 13 Nov 2016, 17:00
Resource For London
356 Holloway Road
London
N7 6PA
""Land plays a central but unmentioned role in our country today: widening inequality, a chronic housing crisis, dysfunctional food system, poor public health and impending climate disasters. We want to bring people together to talk about how land ownership and control is central to all these issues. Together we can unite to fight for the changes we need.
Land For What? is a collaborative space for learning about and challenging the way land is owned, controlled and used in the UK and beyond.

Join us on 12th and 13th November for a participatory weekend of learning, thinking and planning practical action.
Saturday will provide an in depth insight into where we are and how we got here. The sessions will be looking at a range of the current struggles we're facing including housing, food & farming, public space, environment and community. We'll be understanding their history, interrogating their causes as well as looking at the projects and tools that have been used to combat them.

'English Land History', 'Learning from Scotland', 'The Colonial Legacy', 'Land Economics' and 'Land Rights' are just a few of the sessions that will be available on Saturday.
Sunday will be focusing on the questions:
how do we challenge the status quo and what future do we want?
Discussing our visions we will be looking at education, campaigns, coalitions, collaboration, legislation, taxation,
transparency, direct action and anything else that will push us forward in our campaign to make land a common resource for all. We will also be exploring future activities, strategy and governance for Land for What?
Land for What? is hosted by Community Food Growers Network, Just Space, Landworkers’ Alliance, London Community Neighbourhood Co-operative, New Economics Foundation, London Quaker Houing, Radical Housing Network, Shared Assets and Three Acres And A Cow.
We are committed to making this event as accessible as possible. Those with young children are more than welcome to bring their children into the sessions and we will be providing childcare on site for those who would prefer their children to be less involved. The venue is completely wheelchair accessible with disabled toilets.""
More at: http://www.landforwhat.org.uk/

Previously on this blog:
Community Food Growers and related matters
=========================
2. [Reminder and Update]
CELEBRATE THE 40TH ANNIVERSARY OF THE LUCAS PLAN!
VETERAN TRADE UNIONISTS AND YOUNGER ACTIVISTS SEE NOBEL PRIZE-NOMINATED PLAN AS INSPIRATION FOR THE FUTURE
Leading figures from the left, trade union, environmental and peace movements are coming together at a conference on November 26th with a fresh perspective on tackling current crises, using the ideas of socially useful production pioneered in the Lucas Plan. The Plan, produced by workers at the Lucas Aerospace arms company, showed how jobs could be saved by converting to make products that answer a social need, rather than weapons.

The conference is being organised and sponsored by: former members of the Lucas Aerospace Shop Stewards Combine, Breaking the Frame, PCS, UCU, Million Climate Jobs Campaign, Green Party, Scientists for Global Responsibility, Campaign Against Arms Trade, CND, Left Unity, Quaker Peace and Social Witness, Red Pepper, War on Want and Conference of Socialist Economists
Tickets are £10/£5 concessions: To book for the conference, visit www.lucasplan.org.uk/tickets
For more information, email info@breakingtheframe.org.uk
BACKGROUND INFO: The Lucas Aerospace Shop Stewards Combine's Alternative Corporate Plan ('The Lucas Plan') was launched in 1976 and became famous worldwide, sparking an international movement for socially useful production and workers' plans. Facing the threat of redundancies, the Combine collected 150 ideas from shop floor workers about alternative socially useful products that could be produced by the company, instead
of relying on military orders. Many of the innovations in the plan, such as hybrid car engines, heat pumps and wind turbines were commercially viable and are now in widespread use. Although the Alternative Plan was rejected by Lucas Aerospace managers, it was instrumental in protecting jobs at Lucas in the 1970s. The Combine was nominated for the Nobel Peace Prize in 1979 and Mike Cooley received the Right Livelihood Award in 1982. More information about the Plan, including the 53-page summary of the five 200 page volumes, can be found on the conference website,
Links:
[1] http://www.lucasplan.org.uk
[2] http://www.lucasplan.org.uk/tickets

On the Record are hosting a free, all-day event at Hackney Museum to celebrate the end of their project: A Hackney Autobiography: Remembering Centerprise

Hackney Museum, Ground floor, Learning & Technology Centre, 1 Reading Lane, Hackney, E8 1GQ
Come and share in the history of Centerprise, the bookshop, cafe, community centre and publisher.
Tour the exhibition at Hackney Museum: People Power: Black British Arts and Activism which includes some of the Centerprise archive.
Take part in discussions, perform in a Centerprise inspired open mic and enjoy free refreshments.
If you have not already registered and would like to attend, please email info@on-the-record.org.uk
Programme:
11am – 11.30 Welcoming words (including from co-founder of Centerprise Margaret Gosley)
11.30-12.00 Tours of exhibition by curator, Niti Acharya
11:45 – 12:45 Panel Discussion 1 – Education and Centerprise, past and present
12:45 pm- 13:45 Lunch provided /  Tours of exhibition by curator, Niti Acharya
13:45 – 14:45 Panel Discussion  2 – The legacy of Centerprise
14:45 – 3:30 Open mic: performances and readings from Centerprise and beyond.
3.30 - 4.00 Plenary discussion: have the final word on A Hackney Autobiography.
*** All day: coffee and snacks available, in learning room only***
Call-out for the open mic! It would be a great help to On the Record and the MC, Bernadette Halpin, if you would agree to step up and entertain for the common good - or you could nominate an acquaintance or colleague who you would like to see read/perform and put us in touch with them. Let us know if you have a piece of writing in mind which you don't have access to.
Please register your interest in the open mic by emailing us: info@on-the-record.org.uk

A Hackney Autobiography's forthcoming app and book will be launched separately in early 2017.

Killing Communists in Havana: The Start of the Cold War in Latin America

"The Cold War started early in Cuba, with anti-communist purges of the trade unions already under way by 1947. Corruption and government intervention succeeded in removing the left-wing leaders of many unions but, in those sectors where this approach failed, gunmen linked to the ruling party shot and killed a dozen leading trade union militants, including the General Secretary of the Cuban Sugar Workers' Federation.
Based on material from the Cuban archives and confidential US State Department files, this SHS Occasional Publication will examine the activities of the US government, the Mafia and the American Federation of Labor, as well as corrupt Cuban politicians and local gangsters, in this early episode of the Cold War."
FREE TO ATTEND – ALL WELCOME
============================

Veteran Bolton peace campaigner Malcolm will talk about his uncle Alfred Evans, one of the conscientious objectors taken to France in 1916, court martialled for refusing to fight and sentenced to death although that sentence was then commuted.  The talk will include sound recordings of Alfred speaking about his experiences and about what motivated his stand.

Thanks to everyone who has already booked a ticket for our fundraiser at the University of Salford on Sunday 27 November at 2pm with Christopher Eccleston, Sheila Hancock, Julie Hesmondhalgh, Mike Joyce and Maxine Peake. Although the initial run of tickets sold out in three days flat, we have been able to put some more on sale, and there may well be a final tranche which will go on sale nearer to the day.  If you don't have a ticket and you are not already on the waiting list, it might be worth adding your name... http://www.wcml.org.uk/radical-readings-fundraiser/

Shelagh Delaney's work has inspired the young people of this generation to tell their stories of the ever-changing landscape of Salford as a collection of real life thoughts and feelings. This will be performed as part of the Shelagh Delaney Day celebrations at Salford Arts Theatre on Friday 25 November at 7.30pm, along with a live radio play written by Shelagh Delaney herself.  Tickets price £8 and more information here.
Salford Arts Theatre, Kemsing Walk, Salford M5 4BS.

Posted by Radical History Network (RaHN) at 4:59 PM No comments: Links to this post