Based on extracts from a working draft by John Quail, plagiarised with permission by LW.

In the beginning: a gripping tale of splits and factions, in which our heroes finally escape from the scary authoritarian left, after many adventures

The first issue of the magazine that was to become Solidarity was published in October 1960. Called Agitator for its first few issues, it was produced by ‘Socialism Reaffirmed’– the group’s name being also the title of what was effectively a manifesto, libertarian and autonomist in content, issued the same month. In brief, the earliest members of the Socialism Reaffirmed group were expelled from or left the Socialist Labour League (SLL, precursor of the Workers’ Revolutionary Party, its heirs and assigns) at various times in 1960 and formed a new organisation with a new perspective which then attracted further recruits.

Trotskyist background
The SLL emerged in 1947 from a split in the Revolutionary Communist Party (RCP), a short-lived unification of the UK Trotskyists, following a dispute about the correctness or otherwise of joining the Labour Party as a clandestine faction, the alternative being to continue as an open independent party. It was now forbidden to
have dual party membership so the cost of joining the Labour Party en masse was the formal dissolution of the RCP and the maintenance of a clandestine party with the difficulties and potential expulsions involved. The minority, led by Gerry Healy, in favour of joining the Labour Party had the support of the Fourth (Trotskyist) International. The numbers involved were very small. The rump of the RCP faced with declining influence finally decided that it would formally dissolve and ask members to join the Labour Party in 1949, forming another clandestine faction.

Known as The Club or The Group, the Healy entryist faction of 1947 retained a secretive branch structure with membership by invitation while its public face was as a readers’ group or tendency around its paper Socialist Outlook. (proscribed by the Labour party in 1954, it ceased publication in October that year). Members of the Club then joined the Tribune group.

Khrushchev’s denunciation of Stalin and more importantly the Russian intervention to put down a popular uprising in Hungary in 1956 caused enormous dissent in the Communist Party in the UK and led to the loss of 7000 members, perhaps a third of the membership. For the minority who wanted to remain communists, the choices were to form some kind of oppositional communist party, to pursue a course of hardy independence or to join some existing group. The third option would benefit the SLL particularly, as the largest (with about 150 members) and most active of the three UK Trotskyist groups of the time, and the Club/Group had some success in recruiting dissident Communist Party members from 1956 onwards.


After Hungary in 1956 and many other events we became more critical. When I say we, I mean a group of us in the Islington YCL [Young Communist League]. There were a lot of groups at the time who were dissidents. We produced a bulletin which had a circulation of about 800. A lot of us overlapped with or were in a Trotskyist group which didn’t have a name, it was simply called the Group, before we were expelled from the YCL in 1958. – Ken Weller, prominent Solidarist, interviewed by JQ.

Expulsions and departures from the Socialist Labour League.
As a Leninist organisation that wasn’t the Communist Party, The Club was a place to bring together activists from the new movements like CND and rank and file militants from trade unions. There was a democratic constitution, fractions were permitted and, as Ken Weller put it, Gerry Healy ‘had loosened up a bit as a tactic and was quite democratic for a period.’ The Newsletter edited by the able ex-Communist Party journalist and later respected historian Peter Fryer [1927-2006] was described as a ‘lively entrist paper’ and the theoretical journal Labour Review as of high quality. Chris Pallis remembered the more sociable elements getting together in the pub after branch meetings and at summer camps, conversations combining the serious and the jokey, with much writing and circulation of satirical rhymes and songs – the latter a tradition which Solidarity would continue.

Many subsequent events can be explained by the involvement of the Club, overwhelmingly London based, and one of its recruits, Brian Behan, in the 1958 strike at the South Bank building site. Behan was fired by McAlpines as result of his organising efforts but was supported by the site shop stewards’ committee who called a strike, while the builders’ union, the AUBTW, took on the role of strike breakers. With the high profile events of the South Bank strike and the related ‘rank and file conference’ drawing a great deal of adverse press attention to ‘the Red Club’, it could only be a matter of time before the Newsletter and Labour Review were proscribed and a witch hunt against Club members was started by the Labour Party. (Some Club members, most prominent among whom was Brian Behan, favoured open work anyway.) Healy declared the formation of the Socialist Labour League without consultation with the Club’s membership, causing considerable upset in the organisation.

Events led to the formation of an oppositional faction of about 25 members who were rapidly expelled. Any democratic illusions SLL members may have had were being demolished fast and the high profile defections and expulsions during 1959 were accompanied by rising dissent. Ken Weller ‘began to become more and more of a dissident because I felt that most of the criticisms I’d had of the Communist Party were true, in spades, with Healy.’ The democratic constitution was a complete sham. For another early member of Solidarity ‘The growth of the anti-bomb movement and my sympathy with its objectives and involvement in its actions, created particular conflicts due to the SLL’s “critical support” for the Soviet Union and its bomb.’

Healy returned to a more placatory approach to Labour in late 1959 and 1960, and distanced the SLL from industrial action, despite an upsurge of industrial disputes at this time. This return to Labour was opposed by a small group of seven SLL members led by Brian Behan and including Ken Weller, numerically hardly a threat but with support in the SLL. Their expulsion (May 1960) led to 70 people leaving with them.

As National Committee members of the SLL, Bob Pennington and ‘Martin Grainger’ (Chris Pallis, a.k.a. Maurice Brinton) were participants in the expulsion of the Behan faction. But they had developed a series of theoretical criticisms of the SLL and some of its prominent members. A direct challenge was made to the leadership, in this case its ‘obsessional fear of mildly unorthodox views – or of simple questions for which readily prepared answers are not available’. At this point the story moves towards the ideological shift that produced the Solidarity group. A Healy loyalist had reported a conversation in which ‘Pennington and Grainger had admitted to sympathy with the anti-Totskyist journal Socialisme ou Barbarie' and both were summoned to a meeting of the London Executive Committee. When they tried to leave, after an abusive rant from Healy, they were subjected to physical assault. The immediate result was not only departure of these two from the SLL but their break with Trotskyism, permanent in the case of Grainger/Pallis, temporary in the case of Pennington who was later involved in Militant and Big Flame.

Towards regroupment
The flood of CP defections after the suppression of the uprising in Hungary fed into a variety of different Trotskyist and ‘new left’ movements. For important sections of the left, the contortions of ‘anti-anti-communism’ based on assumptions of the revolutionary legitimacy of the USSR and the Communist bloc as the repository of socialism, however distorted, became redundant. Organisationally it was clear that it was no longer necessary for the revolutionary left to form cells or ‘positions’ within the larger Labour or Communist Parties, which no longer had a monopoly of left political activity. In the UK the movement for nuclear disarmament and the shop stewards’ movement were not under the complete command of any of the political tendencies. For the Trotskyist mindset these represented unorganised areas in need of leadership and potential recruitment. For the more reflective they represented new movements in a new geopolitical context which demanded a new politics.

Out of the group that left the SLL with Brian Behan and Ken Weller, a number formed an organisation called the Workers’ Party, lasting less than a year, then a group from this including Weller and others started reading all the critiques of Trotskyism they could find and opened discussions with, inter alios, Grainger and Pennington. Of all the positions they considered they found that of Socialisme ou Barbarie the most interesting. On this basis the discussions drew them closer and a common platform was established during August and September 1960.


[Part 2 - Socialisme ou Barbarie and the origins of Solidarity follows] 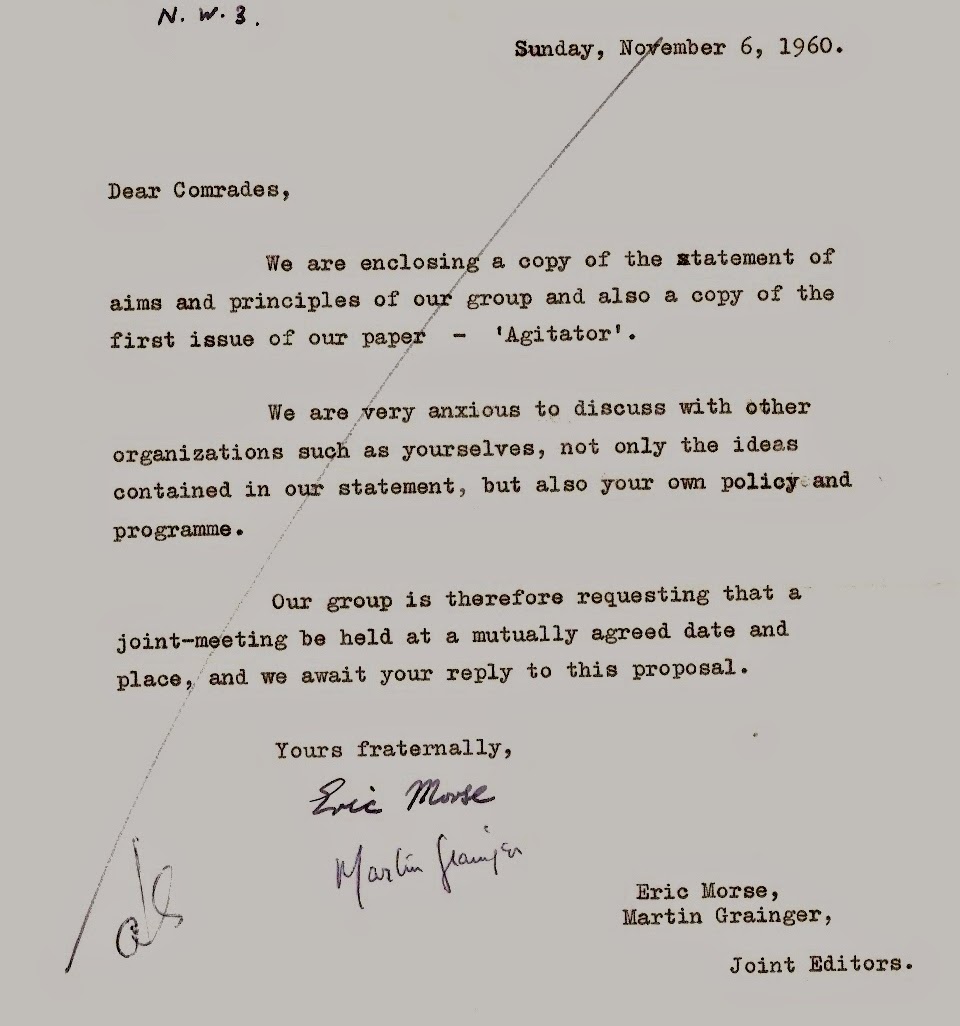 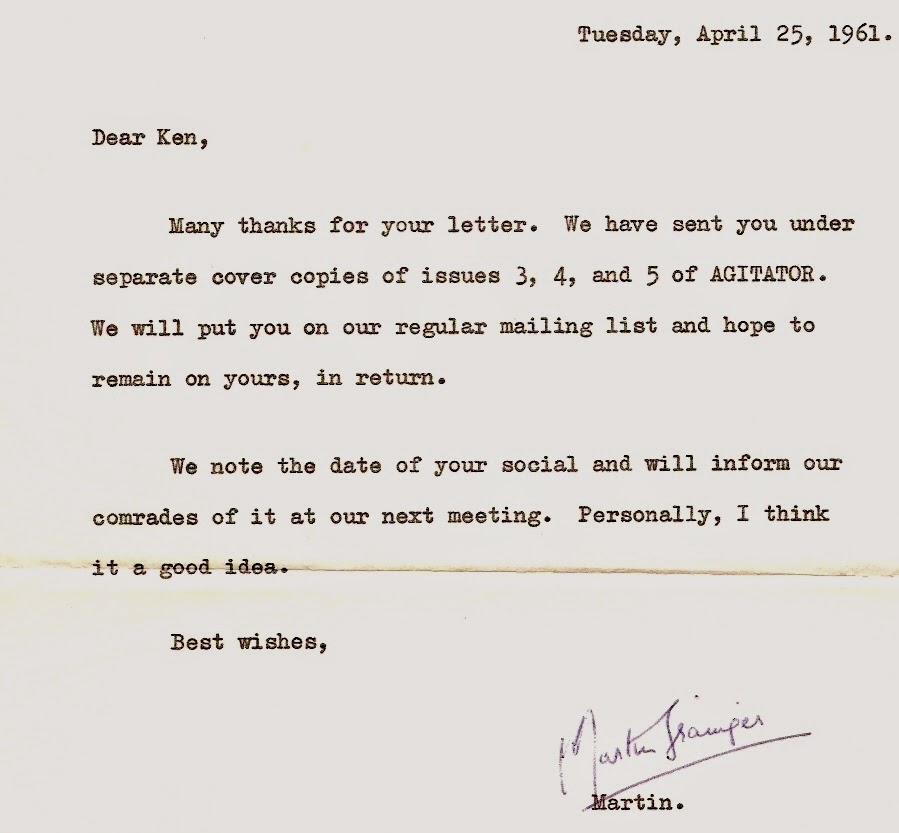 Letters to the Syndicalist Workers' Federation about fraternal contact, sent with early issues of Agitator magazine, precursor of Solidarity for Workers' Power.

Posted by Radical History Network (RaHN) at 7:40 AM