Spies for Peace 1963: An Example of Libertarian Direct Action

Fifty years ago this Easter a small group of individuals associated with the Committee of 100 and/or Solidarity found detailed plans to be implemented by the British government in the event of nuclear war, a contingency which was clearly considered to be on the cards and which those in positions of power intended to survive, however few people were left for them to govern.
The  initial semi-accidental discovery in February 1963 was of RSG6, the Regional Seat of Government at Warren Row, fortuitously close to the route of the CND march from Aldermaston that Easter weekend.  In the intervening weeks there was a return visit, better organised, in which photos were taken, maps traced, documents transcribed or appropriated, and a spectacular publicity coup was prepared.  A duplicated pamphlet, Danger -  Official Secret! was distributed by post to make the information (which included a list of the other RSGs and register of occupants).as widely available as possible without disclosing the identities of the ‘Spies’, who risked punitive jail sentences if caught. They never were. The revelations were reported in the national media on Easter Sunday, and large numbers of the marchers, favouring direct action, chose to take the route to RSG6 in defiance of the ‘respectable’ organisers.

All the considerable efforts of the police and security services failed to discover those responsible. Files reveal how seriously the state took the matter, believing the yarn that an inside tip-off was behind it and debating whether to revise the policy on selecting staff for the RSGs. 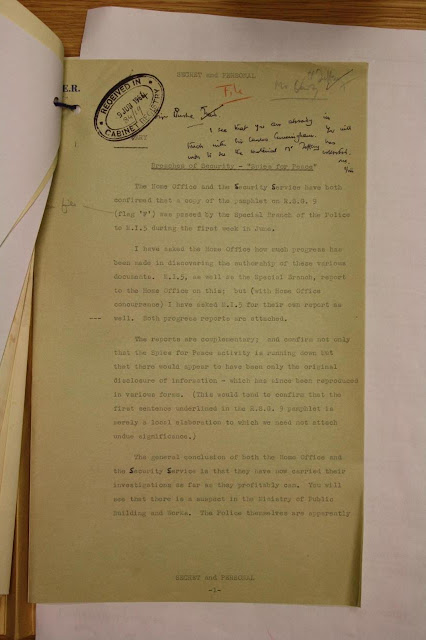 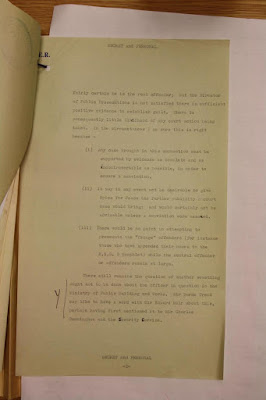 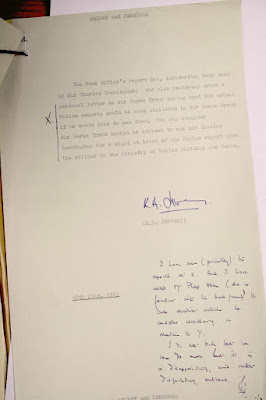 Now that those sinister places have been relegated to Cold War history, metamorphosed into tourist attractions – which is not to say that the mindset behind their creation has been reformed and rendered harmless – it may be difficult to realise the shock effect their existence produced. To quote Natasha Walter:
Although it had long been common knowledge among the elite that there was a secret system for wartime government survival, it came as a shock to ordinary people that their rulers were making detailed plans to fight a nuclear war and to ensure the survival only of the politicians and civil servants, without any democratic consent.
It took a long time for the RSGs to become the bizarre heritage sites they seem to be today, but the futile farce of ‘Civil Defence’ in the context of nuclear war was decisively exposed. There were follow-up exposés, publications and demonstrations in various parts of the country for yeas after.
The action was carried out by a small number of libertarians acting on their own initiative, its impact ensured by careful planning, without leaders or ‘discipline’, and by a network of committed trustworthy supporters. It encouraged the more radical, activist elements in the anti-war movement and is perceived to have influenced many subsequent protesters.
Something like the full story has only recently been told.
Sources / Further
Sam Carroll, Danger -  Official Secret! and the Spies for Peace: discretion and disclosure in the Committee of 100. History Workshop Journal, Spring 2010: (no. 69) pp.158-176.  The most complete and well-authenticated account there is likely to be, using interviews with participants; sympathetic and thoughtful analysis from a Life History Research viewpoint.
Natasha Walter, ‘How my father spied for peace’, New Statesman, May 20, 2002. The essentials of the story as heard from well-known anarchist Nicolas Walter and some others.
Cabinet Office File, CAB 21/6027 Security significance of Membership of the CND and other Unilater[al]ist Organisations: “in light of Spies for Peace incident, to consider if any special security arrangements may be required for RSG staff…” “desirability of avoiding political embarrassment such as resulted from Spies for Peace incident” etc. In relation to the next training exercise “FALLEX 65, May '65: “Detailed information on the probable extent of slaughter and devastation will necessarily be given; clearly ought not to be given to an active CND supporter; undeclared sympathiser might yield to emotion as probably happened in 62.” (Quotes from notes made when reading the file in the National Archives).
Peter Laurie, ‘Can a secret be SECRET if it isn’t actually secret?’ New Scientist July 13 1978 pp.96-99.       “I have often been asked why, after so much fuss had been made about ‘Spies for Peace’ in 1963, there was no objection to my book [Beneath the City Streets] four years later, which in some respects went a good deal further.  I think the answer is that in 1963 the government was in the middle of the huge and urgent task of moving its war infrastructure from under and around the major cities, where it had been buried against the Russian atom bomb of 1953, out to the country where it might be safe against the Russian H bomb of 1961.  Angry public debate about the ethics of sheltering the top brass while the rest of us fried in the fall-out might delay this essential work. But by 1967 it was mostly done.”
Matthew Grant, After the Bomb: Civil Defence and Nuclear War in , 1945-68. , Palgrave Macmillan, 2010.  Review at <http://www.history.ac.uk/reviews/review/898> says it “shows that building shelters for all of the 11 million 'key workers' required to keep Britain running in the event of a nuclear strike would have cost £32 million more than the entire NHS budget for the same period.”
Peter Hennessy, The : and the Cold War. , 2002. See pp. 164-8 ‘Probable nuclear targets in the : Assumptions for planning’. Also gives a mention of the ‘Spies for Peace’ episode, which likewise featured in a National Archives exhibition Hennessy curated a few years ago.
N J McCanley, Cold War Secret Bunkers.  , Leo Cooper/Pen & Sword, 2002. Gives the text of Danger - Official Secret! (pp. 166- 171) in full saying that it “encapsulated the distrust, fear and feelings of a generation”.
Posted by Radical History Network (RaHN) at 11:42 AM