Spain and the World: Aspects of the Spanish Revolution and Civil War (1) 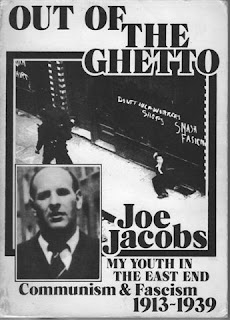 Joe Jacobs, in his well-regarded memoir of early 20th-century left-wing political activism, had quite a lot to say about the Spanish Civil War, showing how important it was in the political life of the time, in London’s east end as elsewhere. He refers extensively to his files of the Daily Worker (DW, the Communist Party newspaper which eventually became the Morning Star), highlighting the inadequacy and inaccuracies of its coverage and using it to show how the official ‘line’ lagged behind events.


Chapter 10 of his autobiography is entitled ‘Three Tailors from Stepney in Spain’ (pp.213-21 in first edition). He tells the story of how Nat Cohen, Sam Masters, and Alec Sheller set off by bike for the Barcelona Olympiad (the alternative to the ‘Nazi’ Olympics in Berlin), due to start on 19th July 1936; Joe and his wife Pearl were expecting to see Nat and Sam in Antwerp in about a fortnight. But by 20th July headlines were appearing, if not yet as front-page news, about the attempted right-wing military coup, already termed ‘Fascist’, and resistance to it: ‘Masses defend the Republic’; ‘General strike begins’...


Within a week reports had started coming from a DW special correspondent, the headlines were big, and the word was out to rally supporters to the cause of the Spanish Republic: ‘All into action now’. Joe noted that no more than two days’ notice was required to fill any hall when events in Spain were being
discussed. Meetings were going on all over the place; holiday plans were called off, the Barcelona Olympiad was abandoned and the British delegation returned, but there was no news of the three tailors. The first report of their presence in Spain came not in the DW but in the Daily Express, whose reporter had ‘found’ them with the government forces in Barcelona and been told how they crossed the border from southern France when they heard what was happening. An editorial launched into a xenophobic and of course anti-Communist denunciation of such intervention.


The contrasting Party Line of the DW was given on August 6: ‘No neutrality’, and ‘Not Soviets but defence of democracy’. Although even at that distance ‘it looked as though this fight would in fact be for a workers’ revolution over all the forces of reaction in Spain’, Joe did not ‘recall any discussion or consultation with the membership about the issues raised by the Spanish struggle’. Nevertheless, for activists like himself, ‘The outbreak of the Spanish Civil War demanded all our attention during the first few weeks and a lot of time for longer’ in the form of whole-hearted support for efforts to publicise the Republican cause, raise funds for medical aid, and expose the realities behind ‘non-intervention’.


For a time he did not see the full significance of his friends’ action, even when he received a letter from Nat Cohen about himself and Sam having joined the militias. When Joe mentioned this, and the lack of official CP notice taken of it, to members of the District Committee, he ‘felt the response was not altogether one of approval for Nat’s actions.’ Alec Sheller was the first of the three to return, largely ignored except by the Stepney branch of the party, which held a meeting to hear his report. Meanwhile more details had started coming through from Nat, who also sent a photograph showing ‘a few of the boys in the front lines of Mallorca (before we evacuated)’. Joe uses these first-hand accounts to correct inaccuracies and omissions in the DW and later versions of events, arguing that the International Brigades were not a CP creation but a development from the early response of committed volunteers.

Of course other things were happening in the East End, and the stories of anti-fascist struggle at home (notably Cable Street) and of the author’s own difficulties with the party are interwoven here. Still ‘the fighting in Spain could not be ignored in all our preoccupation’ as the situation grew more critical. Both Sam and Nat were wounded before the end of the war and shortly before the end of Joe’s narrative we learn that they were in the ‘English hospital’ in Barcelona ('Cranen' - probably Grañen).

There are interesting postscripts, however, in the editor’s continuation, written up from notes and documents. One strand concerns Nat Cohen and his future wife Ramona, a Spanish nurse, whom he managed to smuggle out of Spain when he himself was repatriated as a result of his injury. The problem of getting her into Britain from Paris was solved by a comradely arrangement with Joe and Pearl whereby the Jacobses went to France, met up with the two from Spain, and Pearl returned as a ‘day tripper’, having given her passport to Ramona. (It worked.) For Sam Masters the outcome of the war was a tragic contrast. He recovered sufficiently from his lung injury to go back to the fighting and was killed in the Brunete offensive. He had been ‘allowed’ to speak up on Joe’s behalf when the latter was faced with suspension from the party.

Joe had continued to take note of the Spanish events as his problems with the CP intensified; his critique focused on issues like Spain, implying that the party, as distinct from the rank and file, was too inclined to drag its feet. In yet another way the struggle impinged close to home: Joe’s brother Hymie (a.k.a. H Jackson) turned up as a prisoner of war in a Nationalist concentration camp. Termed ‘a sort of individualistic “Anarchist”’ he had crossed the Pyrenees on foot in 1937 and joined up with the British Battalion, having fallen foul of the law in London. According to his niece he admired the republican cause, and the bravery especially of the anarchists, but had little respect for the CP leaders of the British Battalion. He was particularly struck by the power of the Catholic Church in Spain and the popular reaction against it. Eventually he was released, in late 1938, and returned to the East End.


Like many others, Joe Jacobs went on remembering Spain and analysing its significance for all those on the political left.


In his own words…


The Spanish Civil War, particularly the International Brigade, is another example of how the C.P. started by sabotaging and weakening the movement, only to take it over, claiming all the credit and ending up by subverting its aims.


Some friends of mine were on their way to the Barcelona Olympiad (to be held in opposition to the Olympic Games in Hitler’s Germany). They arrived at the Franco-Spanish border on July 19, 1936. The revolt of the army under Franco had already begun. They crossed into Spain and two of them joined the Republican Militia in Barcelona. One of them later formed the ‘Tom Mann Centuria’ – an English unit – around the time when some Germans and others were arriving in Spain. Units were being created from among many foreign volunteers.


Once again, when ordinary people – rank and file – initiate a struggle which they seek to manage themselves, and this proves effective, the parties arrive to try to take it over. In this case the C.P. succeeded. We know how the International Brigade was used against anyone critical of C.P. policies and domination. We also know how the Communist Party continues to claim credit for all the heroic efforts of all the volunteers who fought in Spain. We all know how the struggle ended.

And as others saw him…


On March 29 Joe Jacobs died of a heart attack in University College Hospital, at the age of [nearly 64].

Joe had been a rebel since childhood and a revolutionary all his political life. Active in the workers’ movement in the 1930s (see his article ‘The Good Old Days’ in Solidarity vol, 7, no 10) he was expelled from the Communist Party in 1937 for advocating street mobilisation and working class direct action as a means of fighting the fascists in London’s East End.

After an association with Trotskyism in the early 1950s, Joe joined Solidarity in 1970. He wrote our pamphlets The Postal Strike and Under New Management in 1971 and 1972 respectively. In the last couple of years Joe developed severe disagreements with the London group. These eventually led to a parting of the ways. Despite this we all retained personal respect and affection for him. He was young in heart and he gave unstintingly of himself to the revolutionary movement. We regret he did not live to see the triumph of the cause to which he devoted so much of his life.

Previously published on this blog
Women in the Spanish Revolution
Posted by Radical History Network (RaHN) at 1:26 PM

Labels: Joe Jacobs, Out of the Ghetto, Spain and the World