This will be followed by an IWCE Seminar in Swansea on


12th October. The speakers will include Richard Lewis on the Plebs League and WEA in South Wales (ie on his book Leaders and Teachers), Rob Turnbull on Naoh Ablett, Dave Chapple on Mark Starr and the autodidact tradition, Hywel Francis on the miners' libraries, and Colin Waugh on the Ruskin strike.


This will be followed by an IWCE Seminar in Swansea on
12th October and another in Newcastle in December.

Posted by Radical History Network (RaHN) at 3:54 PM No comments: Links to this post

1. An interview with Charles Foster, who was involved with Hackney
People's Press newspaper in the 1970s:

2. An overview of The Hackney Flashers - a radical feminist photography
group from the early 80s:

Also smaller bits on police spies in Hackney, a new book from John Barker
(the Stoke Newington 8 one), and more.

A couple of updates:


Another book launch -
"A Hoxton Childhood" by A S Jasper has been republished. The launch is taking place at Broadway Bookshop in Hackney on the 9th of October. (The book was originally published in 1972 by Centerprise):
http://blindingbooks.com/?page_id=249
Some small pieces/links on the site about squatting in Stamford Hill Estate and being nicked by corrupt cops, the 1996 Hackney Anarchy Week film, etc. :

And booklet produced for the last RAHN meeting, now available online in a slightly expanded form:


Posted by Radical History Network (RaHN) at 11:32 AM No comments: Links to this post


Poems & Pints – music and poetry of struggle & rebellion, with a railway strike theme! Beer & wine too!


Where: ‘The Club’ Queen Victoria Rd


A panel will discuss the significance of the 1911 events and compare the uprisings and revolutions currently sweeping the globe. Speakers will include Jonathan Edwards MP, John Edwards (author ‘Remembrance of a Riot’), Rob Griffiths (Author ‘Killing No Murder’), Tim Evans (author ‘The Great Unrest & a Welsh Town’) Chair: Alice Greenlees (Unison steward) There will be plenty of time for questions & contributions from the audience. Free tickets are limited. Ring Tim Evans on 0796 2804 452 to reserve tickets.


I do hope you will be able to attend one or all of these events. E-mail me so we can have some idea of numbers. Remember for the forum places are limited, so you need to get a ticket:

http://1911llanellirailwaystrike.org.uk/
Posted by Radical History Network (RaHN) at 11:26 AM No comments: Links to this post

" It was a very exciting and productive meeting in which people shared their experiences and thoughts on an important slice of history that should not be forgotten. The aim of the new group is to enable people to celebrate and learn from past campaigns and achievements." - said Alan Woodward, RaHN Convenor...
A lively discussion followed, in which people emphasised the importance of workers' solidarity and picket lines, internationalism, and people taking action for themselves rather than following national leaders. The meeting attracted nearly twenty people.  [Extracts from press release].

In a Press Statement dated 19 February 2006 Alan Woodward announced: ‘NEW LOCAL HISTORY STUDY GROUP SUCCESSFULLY LAUNCHED’. The first meeting, four days previously, was on the subject of local support for the Liverpool dockers’ strike in the 1990s; the next was to be about claimants and unemployed issues in the 1970s and 80s, based on experience from Tottenham Claimants Union.
This set a pattern for the following six years or so: monthly meetings (except in August), issues with local relevance and wider significance, events and campaigns in the past that have resonances in the present. (A popular example: Defeating the Poll Tax In Haringey and Beyond, 1988 to 1993). Alan diligently sought notes from speakers, circulated them in advance by email list, printed copies for future distribution, and sent a press release to the local paper. The latter were usually ignored although at least one was published – oddly enough, about The Story of Solidarity (“for workers’ power”) in October 2006. In addition one of the earliest talks, Dave Black on Chartism, was published as a short pamphlet.

To facilitate fund-raising (opening an account) for further publishing and other projects a basic constitution was drawn up in the summer of 2006, but the group’s organisation remained informal and open. The 64-page booklet on the NHS produced to mark its 60th anniversary was our most substantial publication, drawing together a variety of articles on different aspects from local health services and struggles to long-term medical history. It was planned in a series of inter-meeting sessions at the Tollgate (also the venue for the annual Burns Night celebration) , and ‘launched’ at Housmans bookshop; most of the 500 copies printed went quite fast. There has been a regular RaHN literature stall at Haringey Local History Fair, and from 2007 a RaHN presence, stall and/or meeting, at the London Anarchist Bookfair. Another point of wider contact was through films: “Union Maids” shown at the Wood Green Film Festival and “ Z” in association with Haringey Independent Cinema (2007).

The programme of regular talks was decided, a few months ahead if possible, by suggestions from and discussion among as many as wanted to be involved. Anniversaries of an appropriately radical kind were pounced on as a useful focus for discussion, providing some of the most successful choices of subject. Examples were May 1968/2008, brought to life by Alan’s impressive collection of posters, and Spain 1936/2011 with Brian Bamford as the invited speaker (from outside London, for once). The Spanish Revolution and Civil War  also supplied the theme of the innovative online pamphlet on this blog, to which many supporters contributed, and which has continued to attract many page-views.
http://radicalhistorynetwork.blogspot.com/2011/06/spain-and-world-aspects-of-spanish.html

A pdf of the booklet "The NHS is 60" can be downloaded here. 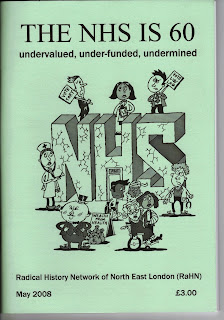 Front cover of the original (and so far only) printed edition.
Postscript: Terry Burton, who has sadly died recently, aged 74, was a frequent attender at RaHN meetings from the start of the group, as long his worsening health permitted. Those who were at the memorial for Alan Woodward will remember his moving tribute; their friendship dated from their days of National Service in the RAF. An obituary of Terry by Keith Flett, another old friend and comrade, was published in the Guardian, 8 September 2013.
Posted by Radical History Network (RaHN) at 11:43 AM No comments: Links to this post