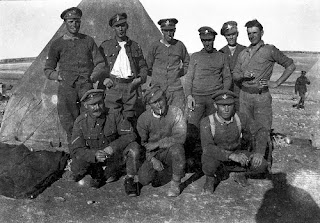 
Paul Burnham talks on  The Radical Ex-soldiers of 1918

Meetings for the autumn/winter will be at: The Postmen's Office at the North London Community House, 22 Moorefield Road, London N17.[The old Post Office] The venue is just around the corner from Bruce Grove British Rail Station, where Bruce Grove meets the High Road in Tottenham.

From 1916, a new and radical movement amongst wounded and discharged soldiers emerged in Britain. As more and more were demobilised, the movement mushroomed, rejecting charity to demand rights and
representation. The ex-soldiers had been through life-changing experiences. They were young and impatient.
More...
The Ex-servicemen had generally bitterly opposed strikes in wartime, but they were also strongly working class, and demanded work at trade union rates of pay. But they were often very hostile to women workers. Their organisations ran candidates in elections, and challenged the government directly. They marched in military step in demonstrations that often ended in violence, when reports-back were received that their demands were not to be met. There were riots in several towns on Peace Day 1919, when many ex-soldiers boycotted the official celebrations of peace.

The ex-servicemen argued against useless war memorials; they wanted recreation halls or hospitals built instead. Their largest organisation adopted an advanced programme of progressive reform, including equal pay for women, abolition of the House of Lords, and the public ownership of monopoly industries.

A separate, conservative ex-servicemen's organisation had been set up in 1917 to counter the radicals, but it took years to secure the merger of the different organisations into the British Legion in 1921.

The radical former soldiers were a volatile and contradictory element in the period of radicalisation at the end of the First World War.
Posted by Radical History Network (RaHN) at 10:04 PM No comments: Links to this post