Liz was born in Stornoway, daughter of Margaret (Peggy Flett) and Calum ‘Safety’ Smith, joined four years later by sister Alison. Her early childhood is recollected as a time of street games and unsupervised freedom on long summer days and it was this vision of Stornoway that stayed with her in later years. Her parents, large extended family, the wild landscape and stifling social mores of the island provided an ongoing source of inspiration and rebellion. An outstanding and prize-winning student, she developed a facility for languages and history in particular. The family moved to Dingwall in 1959, where younger sister Marjory arrived just as Liz was preparing to go to Aberdeen University to study history in 1964 at age 16.
It was in Aberdeen that her interest in politics crystallised, as she became an active member of Youth CND and left-wing societies, attending regular meetings and hops. She developed her lifelong internationalist, libertarian socialist outlook, joining Faslane protests, a peace march to Paris, and hitch-hiking across Europe to an anarchist camp in Italy in the summer of 1967. After attaining her MA in History, she chose Belfast to pursue a course in library studies, because it "seemed like an interesting place to be in 1968" and found herself on her second day in the province helping Bernadette Devlin up during a civil rights march. It was in this heady atmosphere that she met her future husband, Roy Willis. They married in 1969 and Janetta was born in 1970.
As the political situation deteriorated, the young family moved to London, where Mark was born in 1972. Roy’s social work course took them to Muirhouse housing scheme in Edinburgh, where Liz found time to get involved with tenants’ rights and demos in support of the miners and other causes. Returning to London in 1974, they settled in the borough of Ealing, where she spent the majority of her life. She found her political home in the shape of Solidarity for Workers’ Power, remaining an active member until its demise in 1992. Amongst her many contributions was the pamphlet ‘Women in the Spanish Revolution’, which remains a key text on the subject.
While looking after young children she stacked shelves in Sainsbury’s before finding a position at the Medical Research Council library at Hammersmith Hospital. Some of her most treasured memories were family holidays in Europe, allowing her to practice her proficiency in several languages and absorb her interest in the history and culture of places that she could still recollect clearly 40 years later. Her thirst for knowledge continued as she collected four diplomas and her activism was undimmed as she took on new causes such as the Polish Solidarnosc movement and provided support to an Iranian refugee friend. In the 90s, divorce and grown-up children allowed her more time to concentrate on her writing, research and book reviews, joining Medact’s Medicine, Conflict and Survival journal editorial board in 1991, which she served on until her final year, and for which she wrote well over 100 items. She also participated in the London Socialist historians’ group, Anarchist Research Group and other radical history forums. As grandchildren appeared in the new century, she proved to be a devoted grandmother, from knitting baby clothes to excavating archive materials to help them in their studies.
She started the ‘Smothpubs’ blogspot in 2011, (so named after a mix-up when helping police with their enquiries), with articles on a range of subjects including local and family history and including a mine of material on conscientious objectors. When diagnosed with cancer last year, she carried on through chemotherapy and a clinical trial, taking it as an opportunity to learn about the latest medical research and the state of the NHS, for which she was always committed but for most of her life never had much cause to use. She was appreciative of the NHS staff’s efforts to treat and support her in this time. Over the past year living in Walthamstow, she showed little sign of slowing down, continuing her trips to the British Library, Housmans bookshop and local libraries. She continued to collect material for her blog and the Radical History Network blogspot, and even found time to do translation work for an anarchist research project and take part in the E17 Art Trail. She managed regular trips to Scotland, including a flying visit to Stornoway to see her uncle Donald Smith’s retrospective exhibition and retrace childhood footsteps. It was only in the last month or so that the disease took hold, but she remained a ‘free rebel spirit’ to the end.
Liz Willis (21.10.47-10.11.19) 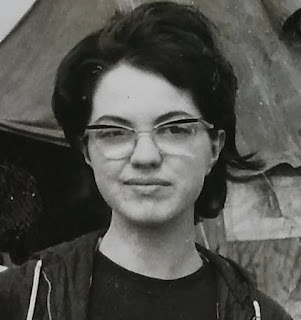