NEW from PAST TENSE

Past Tense’s second annual London Rebel History Calendar, commemorating some of London’s radical, riotous and rebellious (and even some repressive) anniversaries. An interesting and subversive anniversary for every day of next year!
As a contribution to the past 100 years' resistance to war, there’s a fair few World War One dates scattered herein...
In four funky colours, "pithie and profitable for all readers"; how can you afford not to...? 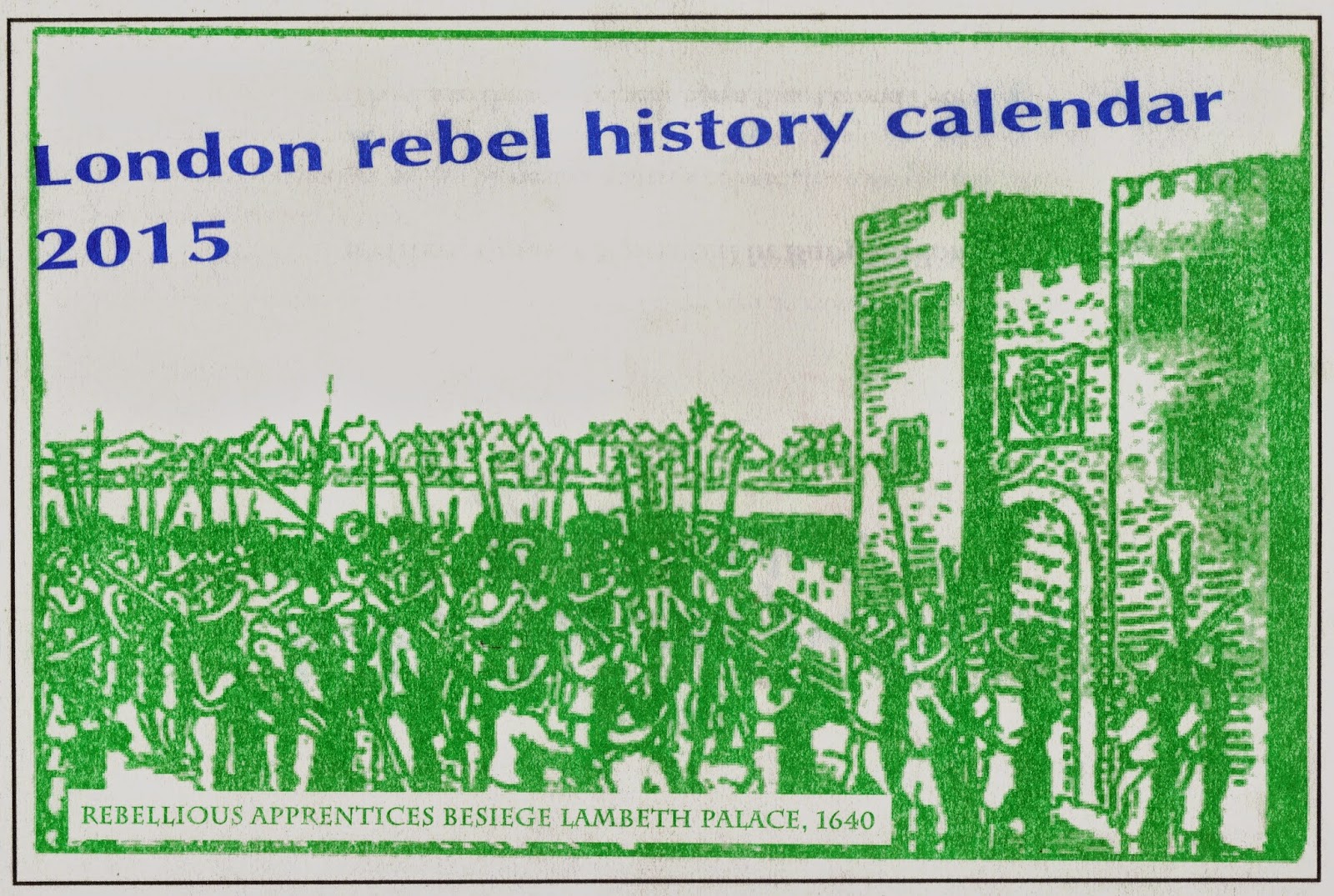 ... AND there's EIGHT NEW PAMPHLETS FROM PAST TENSE:-

Hyde Park in central London has been the scene of conflicts between the state and its opponents for at least 150 years, with protagonists including Karl Marx, the unemployed, anarchists, and almost every radical or counter-cultural current that has ever breathed the London air. This pamphlet covers some of this tumultuous history of sex, drugs and rioting.The first edition of this publication came out late in 1994, (produced by Practical History, one of the projects from which past tense emerged) shortly after the massive demonstration and riot against the Criminal Justice Act with its repressive provisions against ‘raves’, protests, trespass, and so on.
This new edition, produced for the 20th anniversary of the October 1994 Criminal Justice Act Riot, includes additional material not in the original text.

A rip-roaring account of the events of September 1985, when a large-scale riot broke out in Brixton, in angry response to the police shooting and crippling of Cherry Groce, mother of 6, in a dawn raid while searching for her son.

“The revolt of Brixton’s young blacks against the police did not begin in 1981... thousands and thousands of young blacks have grown up in British society having little contact with any other section of British society but the police and courts...”
In the ten years before the Brixton Riot of April 1981, Brixton’s black youth faced routine attacks by the local police, backed by regular military-style invasions by the Special Patrol Group. But racism,
harassment, beatings and arrest sparked strong resistance...

4. Strange Confused Tumults of the Minde:
Wanderings in the past, present and future of radical pamphleteering. £1.50
P&P: £1.00

Since the beginning of printing, political pamphlets have been one of the most popular way to spread radical ideas. Short, sharp, easy to read and distribute; by their very nature, pamphlets lent themselves to underground ideas. But in the age of blogs and twitter, does political pamphleteering have a future?

In 1915, during World War 1, one of the largest rent strikes in urban history broke out in parts of Glasgow, in response to steep rent rises imposed by private landlords. 20,000 joined the refusal to pay rent, organizing a grassroots movement that physically resisted evictions and contested them in the courts, and forcing the British government to passing legislation to control rent levels. The Rent Strike was a significant factor in the development of subsidised public housing. Past tense WW1 series, no 1.

In the centenary of World War One being commemorated by the British government, local councils, schools, museums and the press and media of all stripes, lip service is being paid to the fact that several thousand mostly young men refused to fight. But accounts like this one, of how they were treated, are unlikely to be given anything like the airing that the orthodox script of ‘national unity’, ‘a war for democracy’, ‘the spirit of sacrifice’ will receive.
Of some 16,000 or more men who refused to be conscripted to serve in the slaughter and claimed Conscientious Objector status, at least 6000 were court-martialled and jailed.
But for many imprisonment was far from the end of the story. In prisons and work camps, many were beaten, tortured and starved. And they fought back: through hunger strikes, refusal to work, underground newspapers, and agitation.
This pamphlet details just one episode from this long hidden history. The humour and stubbornness of their rebel spirit shines through the years.
past tense World War 1 Series, no 2

In 1918 the war-weary German sailors and soldiers mutinied, and a radical uprising launched the German Revolution. Wilhemshaven, on the North Sea, was a leading centre of the revolt. The revolutionary ‘Ikarus’, a participant in the events at Wilhelmshaven, gives an account of this
crucial episode in the mutinies that ended World War 1.
past tense World War 1 Series, no 3

An enclosure struggle sparks a discussion of how land should be used, in the wake of the English Civil War.
A great revolution always involves changes in land ownership. That the Puritan Revolution was no exception is proved by the story of agrarian riots in 1659, over property rights to Enfield Chase, a tract of land in Middlesex about nine miles from London. The struggle was between ‘Intruders’ who had purchased part of the Chase and ‘Inhabitants’ who had traditional feudal property rights, including rights of common, over the area.
Their quarrel reproduced in miniature the conflict between moneyed men attached to the new
capitalism and men whose wealth consisted mainly of “feudal” rights and properties - the conflict which underlay the English Revolution. Just as the agrarian struggles of the Diggers helped to provoke the communistic writings of Gerrard Winstanley, the struggle at Enfield inspired the collectivist theories of local thinker William Covell.

we ALSO have a new poster:

Intended to be the first in a new poster series, 'We Remember', commemorating events, struggles, movements and individuals from UK radical history that inspire us; 'The Burning of Newgate' not only depicts the cataclysmic destruction of this most hated English prison, but relates some of the 700 years of resistance to Newgate that the Gordon rioters formed just a part of...

AND HOW CAN YOU GET HOLD OF THEM?

So the above are all available from the publications page at website:
www.past-tense.org.uk
where you can pay by paypal. 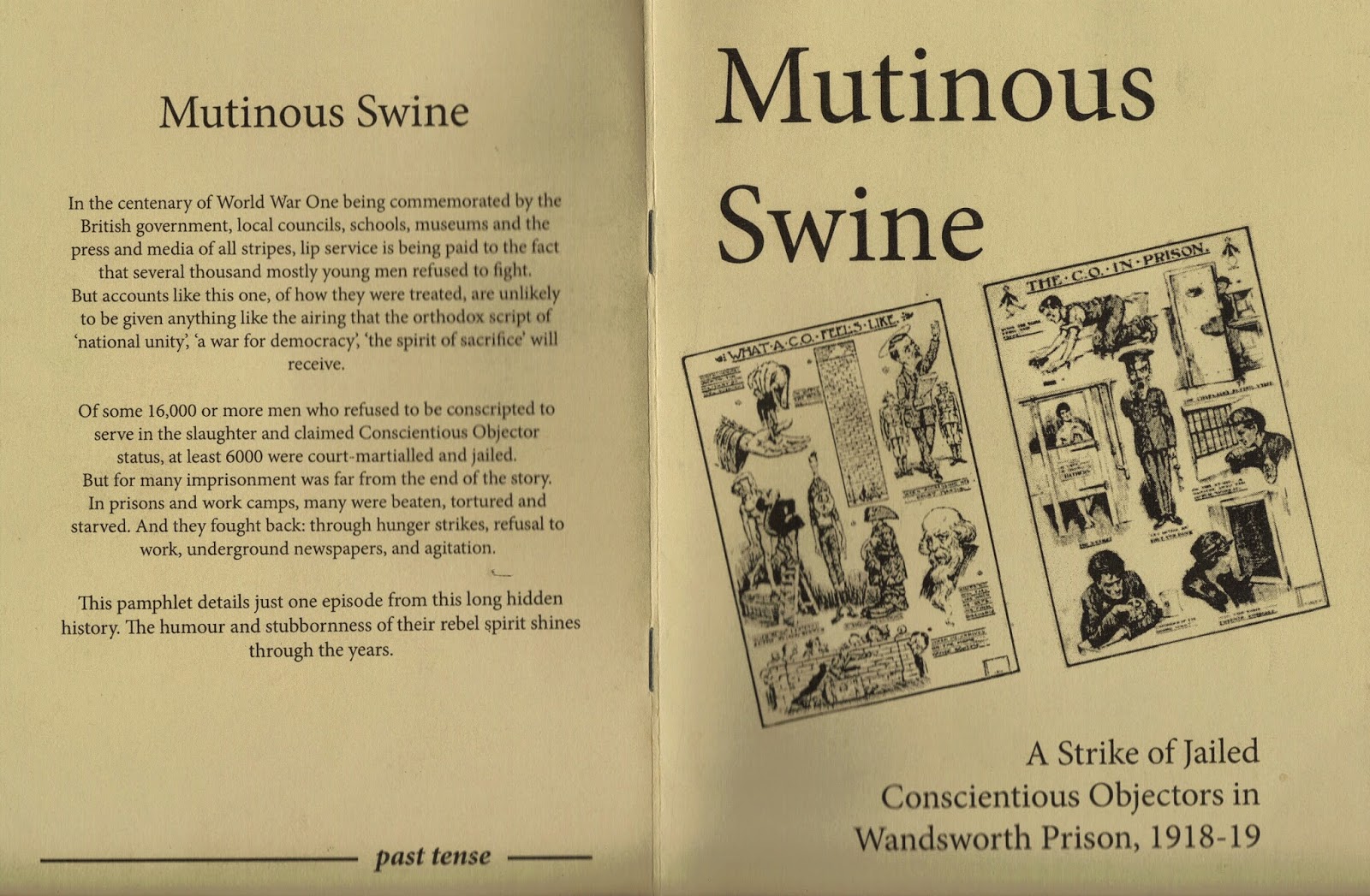 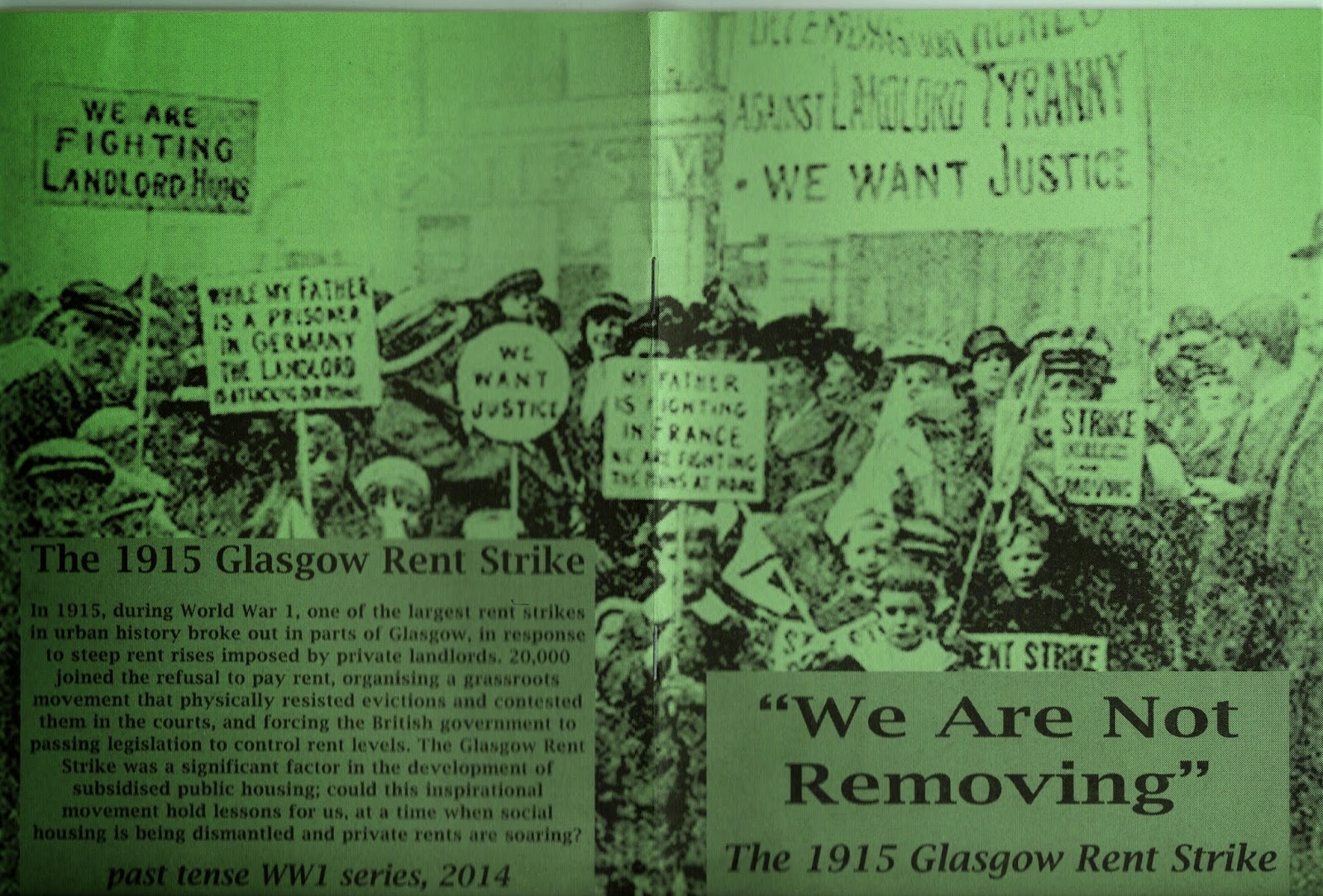 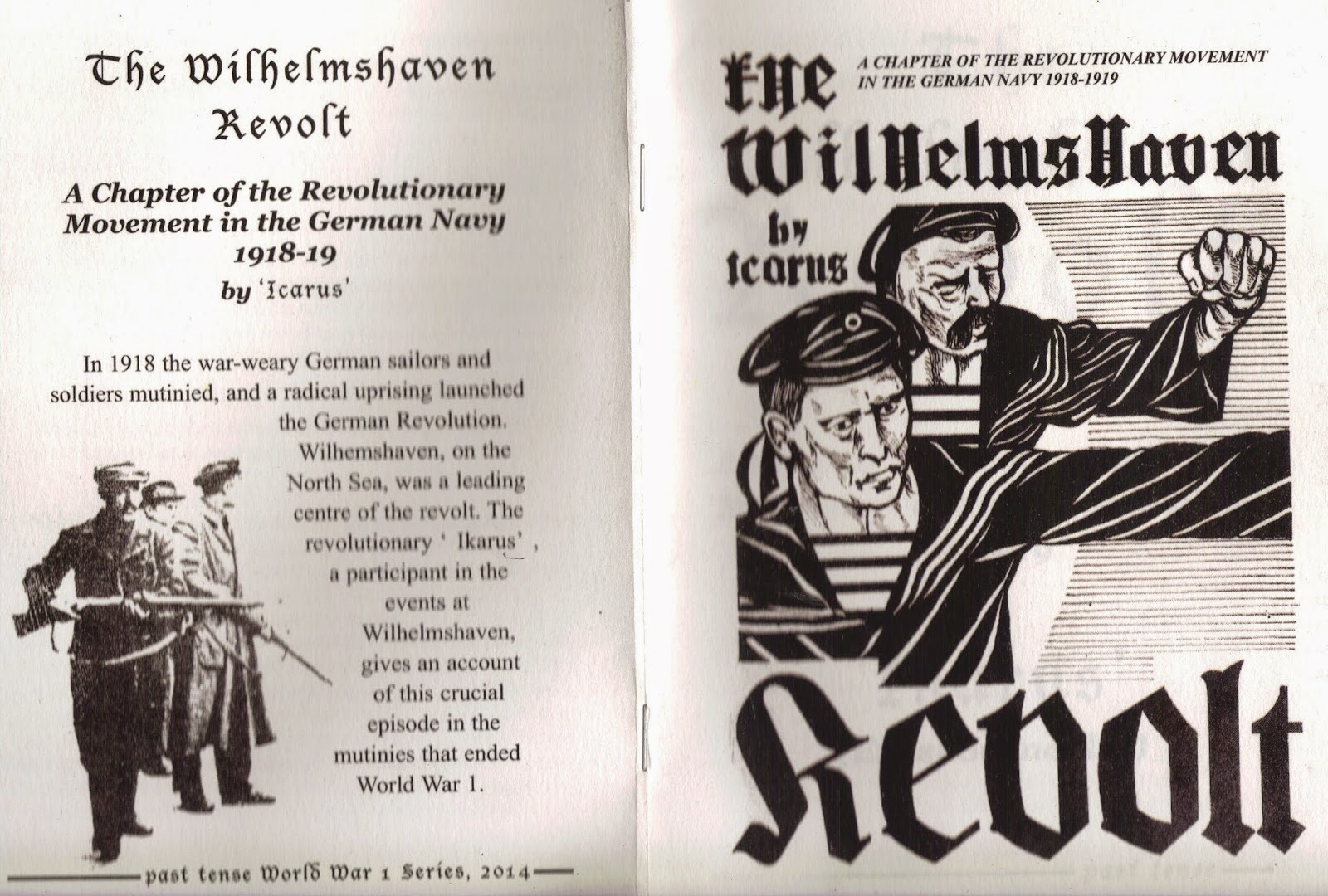 AND from a kindred-spirit group:
A booklet Bristol Radical History Group have recently published on resistance to WW1 in the Forest of Dean and in Bristol.

Coal On One Hand, Men On The Other: The Forest of Dean Miners’ Association and the First World War 1910 - 1920 by Ian Wright is a detailed case-study of resistance to conscription and the 'comb out' amongst the 6,000 coal miners of the forest. This struggle was principally over control of the union, the Forest of Dean Miners’ Association, whose leadership was collaborating directly with the government in its policy of intensifying coal production whilst conscripting miners' for the western front. It exposes the process for forcing miners' into the British army which challenges the idea that formal Conscientious Objection was an option for many working class people in 'war industries'.
More details here.
The booklet is RRP £5 (A5, 106 pages with photos/maps), but can be purchased at trade rates (SOR £3.50) for bookstalls and groups by contacting BRHG at brh@brh.org.uk....