More on Invergordon: Reporting the Mutiny.

There was no news blackout on the events at Invergordon in mid September 1931 (see this blog, September 2011, and Black Flag No.234, late 2011, pp.17-19), much as the Admiralty and government might have liked to impose one. Things had moved fast, and the Cromarty Firth where the ships of the Atlantic Fleet were gathered, although distant from the corridors of power, was not so remote from centres of population and lines of communication that what was happening there could be kept secret.

The Daily Herald newspaper, the only national daily that supported the Labour Party, went to town on the story of what were seen as sensational developments. On Wednesday 16th September, when the sailors’ action was under way and its outcome unpredictable, most of the front page was devoted to different aspects of the situation, with multiple headlines. The following day almost as much space was occupied by the follow up and the announcement of the mutiny’s end result, successfully blocking the imposition of massive pay cuts. Excerpts are reproduced below.

Two of the most prominent among the mutineers refer to the Daily Herald in their memoirs of Invergordon:. Fred Copeman, later of Spanish Civil War fame, says that he was a reader of the paper, which was viewed as ‘red’ in the Navy, the Communist Daily Worker being seldom seen at all by sailors (Reason in Revolt. London, Blandford Press, 1948). Len Wincott, asserting the lack of any left-wing political culture on the lower deck, noted that ‘Even the Daily Herald was not allowed on the ships till 1926,’ (Invergordon Mutineer, 1974, p.66) He too was a reader though, and had, before the mutiny, ‘found time to pen and send an angry letter’ to the paper, not printed or even acknowledged (p.83), about an inaccuracy in one of its reports about the Navy.

From Our Special Correspondent ABERDEEN, Tuesday

Invergordon to-night is as quiet as a village on the shore of a South Sea island.

All the ships of the fleet are lying peacefully at anchor in the bay, and there is no sign of trouble or disturbance.

Members of the town council and municipal officials assure me that for two days there has been no difficulty with members of the crew.

Meetings of the lower ratings were held ashore on Saturday and Sunday at which resolutions were passed protesting against the cuts to pay and seeking their withdrawal.

The Saturday meeting was very boisterous, for many of the sailors had been to Invergordon games, and attended the meeting in a lively mood. Extra pickets were brought on shore to prevent disturbances.

The Sunday meeting was an orderly and serious affair, at which speeches were delivered and questions asked and answered. There was no trouble with pickets or police.

Resolutions passed at the meeting were presented to the commanding officer with the request that they should be communicated to the Admiralty.

I learn to-night that a high officer travelled by air to London to-day. The lower deck hopes that he will return to-morrow with a reply to their resolutions.

All shore leave was stopped yesterday and to-day, when Invergordon was surprised to find the Fleet had not sailed, nor a single bluejacket landed.

Meanwhile no hostility has developed between the men and the bulk of the officers, and the ships seem absolutely at peace.

Yesterday spectators on the shore observed crowds of men meeting on board various ships from which sounds of cheering could be heard, followed by the singing of popular choruses.

On one ship sailors were collected in groups on deck. A party gathered round a piano and held an informal concert.

Another crowd indulged in an acrobatic performance, and this indicated that they were having time off from their usual duty. 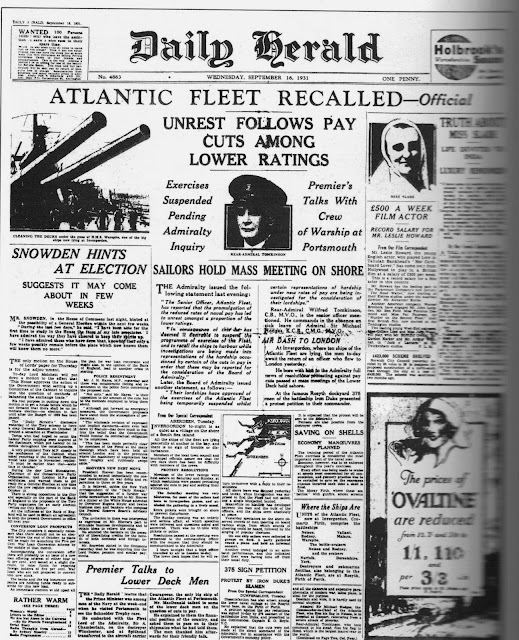 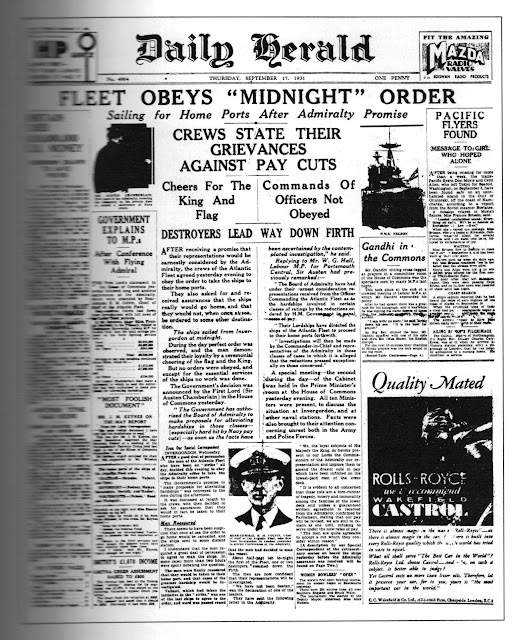 From Our Special Correspondent INVERGORDON, Wednesday

After a good deal of persuasion, the men of the Atlantic Fleet who have been on “strike” all day, decided this evening to obey the Admiralty order to take the ships to their home ports.

The Government’s promise to “make proposals for alleviating hardships” was conveyed to the men during the afternoon.

It was discussed at length by the crews, who then decided to ask for assurances that they would in fact be taken to their home ports.

There seems to have been suspicion that once at sea the order to go home would be cancelled, and the ships sent to some distant station.

I understand that the men required a great deal of persuasion to agree to man the ships. In some cases, more than two hours were spent debating the question.

The men were finally reassured that they would be taken to their home port, and that cases of the greatest hardship would be investigated.

Valiant, which had taken the lead in the “strike”, was one of the last ships to agree to the order, and word was passed round that the men had decided to man the vessel.

About half-past ten to-night the first of the Fleet, one or two destroyers, steamed down the Firth.

The men are now confident that their representations will be investigated.

“We have not been beaten,” was the declaration of one of the leaders.

They have sent the following letter to the Admiralty: [Manifesto demanding rethink on pay cuts].

[Description of ‘extraordinary scenes on board’ on Wednesday 16th, Page Two]
Posted by Radical History Network (RaHN) at 6:40 PM