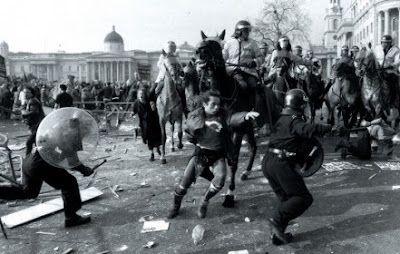 The Government had decided to implement a new tax on April 1st 1990 to replace local government taxation systems. They described as their most important, 'flagship' legislation. It was to be a 'poll tax' on each person rather than on households (as before).

It was immediately seen as a tax on the poor (who lived in more crowded conditions than the rich, obviously) and an extention of government powers over the population due to the need for registration of every individual. It had been introduced into Scotland the previous year to uproar, with massive defiance and popular independent local campaigns in every neighbourhood encouraging non-cooperation and non-payment. They were mostly up against Labour Party administrations (which dominated local government, including almost all working class communities). A majority were not paying.

Inspired by hatred of the government, of the tax, and by the inspirational grass-roots movement in Scotland, a mass movement grew up in every community in England in the build up to the implementation date, April 1st. As each local government authority set the poll tax level they hoped to collect from the local population there were huge and angry protest mobilisations at Town Halls all over the country.

A countrywide demonstration was planned for Central London on March 31st. I was heavily involved in the coordination of anti-poll tax groups in London and countrywide - my group - Tottenham Against the Poll Tax - was the secretarial group of the London Federation of Anti-Poll Tax Groups and I was the delegate Secretary of that Federation up till the autumn of 1989. I continued to be heavily invoved in countrywide communication and coordination activities.

On March 31st 1990 over 250,000 people participated in the demo, calling for mass non-payment and resistance to the tax. It was a carnival atmosphere. As the demonstration passed Thatcher's headquarters (Downing St) there was a confrontation with police, and it soon turned into a battle with mounted police and riot units. Eventually, Trafalgar Sq nearby became a battleground as thousands of people fought police for control of the square. As the police became more desperate and brutal the battle spread to nearby streets and throughout the main commercial streets in the West End. It went on for hours.

The media and politicians went hysterical, trying to deflect public anger (at the tax and at the repressive policing) against the 'irresponsible' anti-poll tax movement and the 'extremists' who fought the police. It was thought that the battle had been planned by the State to discredit the radical nature of the struggle (mass non-payment and street protests) and split the movement.

Up to 500 were arrested during and after the demo, and many charged with heavy charges. There were raids on dozens of activists homes over the next few weeks in a policing operation that was called 'Operation Carnaby'.

Defendants and supporters (including myself) set up the Trafalgar Square Defendants' Campaign which supported all those arrested and helped them fight their case, as well as campaigning for the whole anti-poll tax movement to back those arrested. And to demonstrate again in Trafalgar Sq in defiance of police calls to ban certain types of demos in Central London. All this we successfully did.

The stakes were very high. The repression was countered. The movement stayed united and defiant. Public support increased after the demo. By the following year 18 million were refusing to pay the tax. Thatcher resigned, largely as a result of the damage to her credibility and strategy over the poll tax fiasco. And a few days before an anniversary demo at Trafalgar Sq the next March, PM John Major announced that the tax was uncollectable and would be scrapped.