Some (10) of us met up last Thursday to discuss ideas around counter-histories of World War 1, and taking forward opposition to the upcoming official commemorations. We had a good practical meeting with some concrete decisions…

We did agree to set up as a London group, not yet named, that would meet regularly; we hope similar groups may be set up elsewhere.


One suggestion for principles which we all liked was:-
• We honour all the dead.
• The war arose from normal capitalist social relations.
• Working class resistance stopped the war.

(These may need to be expanded on).

The London group will meet again on Thursday 12th December, at 7.30 at the Mayday Rooms, 88 Fleet St, London.
(NB: Anyone interested in a radical history of Fleet St, could come at 6.00/6.15, for a brief walking tour)


Events and aspects of WW1 worth doing something around:
• The networks of resistance, around the UK (and wider), supporting people refusing conscription…. 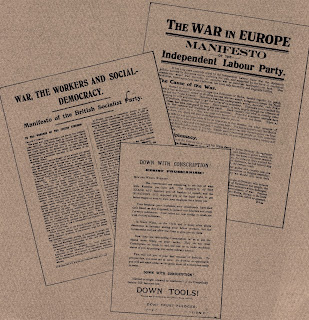 Opposition to the war: leaflets shown on the cover of Ken Weller’s Don’t Be A Soldier!
• How the government acted when war came: the moments it started, they took over all the railways, stopped police leave, requisitioned all horses, introduced legislation to crack down on opposition; also changed licensing laws to try to increase production, interned “suspect” foreigners. Later introduced conscription, after initial euphoric flood of volunteers dried up in 1915; 1915 Munitions Act: government took over all factories for arms production.
On one hand this illustrates the nature of war under the modern capitalist state; on the other, its unlikely the centenary commemorations will flag these repressive measures - not like they’re going to say: hey, look, we introduced conscription! etc. We will have to bang on about all that.


• Some discussion on the myth that World War 1 liberated women
• Theories of the origins of the war: e.g, a theory that WW1 was in effect started to control rebellious working class around Europe.


Someone/ people from Bristol RadicalHistory Group were going to raise WW1 centenary at an international Radical History Conference in Berlin in October.
[Link to BRH spreadsheet on mutinies/strikes in the British armed forces in early 1919.]
Obviously also there will be a lot of activity in Ireland around 2016,
100 years since the Easter Rising…

A timeline of events planned for the official commemorations; from that we could work out some concrete plans.


Activities we could do:
• Actions at or counter to official events, to raise awareness, say we’re still here, still opposing war.
• Specific actions or demos to commemorate specific events: one that has already been suggested was the big anti-war demo in 1914, just before war was declared;
Another idea we came up with at the meeting was a demo at the reopening of the Imperial War Museum’s WW1 exhibits whenever that may be.


One of the biggest events next year will be on Remembrance Day …
Setting up our own counterfeit war memorials, plaques etc.

•Plus: a dedicated website or blog, which could serve as a focus for groups nationally; •publicity: media stunts; music (anti-war songs from history); stickers; and publications such as a short pamphlet summing up anti-war resistance in London.

And more…
RaHN will continue to add general blogposts on this, but to keep fully up to date, join the email list:

remembering-the-real-ww1-subscribe@lists.riseup.net  (send an mail then reply to the email it sends to you)
Posted by Radical History Network (RaHN) at 3:58 PM