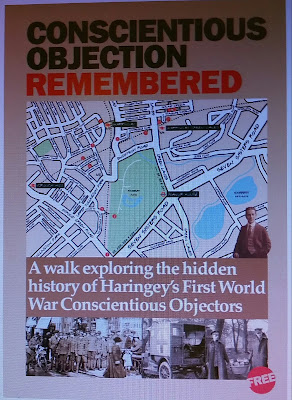 A walk from Finsbury Park to the Salisbury Hotel in Green Lanes, N4, tells the hidden stories of some of Haringey’s conscientious objectors who said no to war. The walk takes a route past houses where conscientious objectors lived, marks meeting places, and points out organisations actively opposed to war between 1914 and 1918.

route as well as locations in Haringey which link to other aspects of Haringey’s First World War history.

Along the way you can find the Stroud Green house where the five Walker brothers lived, all at one time or another arrested, courtmartialled or given prison sentences, visit the hall where Sylvia Pankhurst spoke against conscription in February 1916 and reach the end of the walk at the Salisbury Hotel where protest meetings were held.

The walk covers about two miles in all, and transport links are close by.

The booklet, which is free, is available from local libraries in Haringey, from Hornsey

Historical Society and is downloadable from the project website.

Visit the website for news of guided walks led by Haringey First World War Peace Forum in the autumn.

To find out more about Haringey’s COs and the project go to the Conscientious Objection Remembered website at: www.conscientiousobjectionremembered.wordpress.com email:hfwwpf@yahoo.com


For more on this, see History Workshop page:

Posted by Radical History Network (RaHN) at 6:44 PM No comments: Links to this post

Another new pamphlet from past tense: Alice Wheeldon

(Continuing their valuable series on the real First World War:)

We are pleased to announce... another new pamphlet from past tense... 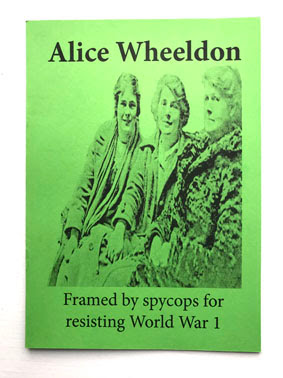 In 1917, Derby socialists and war resisters Alice Wheeldon, her daughters Hettie, Winnie and Winnie’s husband, Alfred Mason, went on trial at the Old Bailey, all charged with conspiracy to murder the Liberal Prime Minister Lloyd George and cabinet minister Arthur Henderson.
In fact the supposed ‘plot’ was a fit up, set up by a spy working for the intelligence unit of the Ministry of Munitions, effectively then run by a combination of Special Branch and what would become MI5. The aim was to attack and discredit the anti-war movement.All proceeds from sales of this pamphlet after costs are covered will be donated to ongoing campaigns against our own modern spycops...Price £1.50Plus £1 for Postage & Packing'Alice Wheeldon' can be ordered online from http://past-tense.org.uk/past-tense-pamphlets.htmlOr by post from;Past Tense, c/o 56a Infoshop, 56 Crampton Street, London SE17 3AE(cheques payable to 'Past Tense publications')It will also soon be available from London radical bookshops and distributors...

Posted by Radical History Network (RaHN) at 12:04 PM No comments: Links to this post

New pamphlet from past tense... a reprint of classic texts from the USA


Gentrification as Social Control in the USA 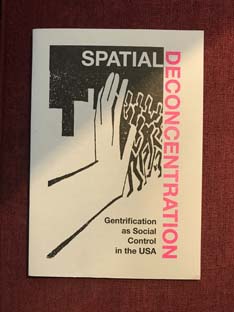 Urban decay and subsequent 'regeneration' have been deliberately used in the USA to disperse poor, mainly black communities, both to disrupt communal solidarity and subvert organised movements for social change,
and maximise private profit.

With the levels of gentrification and development many communities are currently facing in London, it is timely to reprint these classic accounts of how military and political powers, and business interests, devised 'Spatial Deconcentration' to maintain social control.

'Spatial Deconcentration' can be ordered online from
http://past-tense.org.uk/past-tense-pamphlets.html

Or by post from
Past Tense, c/o 56a Infoshop, 56 Crampton Street, London SE17 3AE
(cheques payable to 'Past Tense publications'

You may also like...
this old Solidarity pamphlet [with thanks to libcom]...
Urban devastation: the planning of incarceration

"A pamphlet penned by George Williamson under a pseudonym, analysing urban development in the background of capitalist society and class struggle. Published by Solidarity (Oxford) c1976, much of it is still relevant.
"This pamphlet describes and analyses “the breakdown of the fabric of present-day cities in the light of the development of capitalism from the 19th century till now”, and “looks at the economic influences, the crisis of authority, breakdown of social order and the conflict of class forces as they affect the structure of the urban community” (p.2).
"In line with this perspective, the pamphlet recognises the need “to look at how the form, function and living patterns of urban areas are changing, and at how they could change within the framework of libertarian ideas” (p.4) One of its themes is the examination of the role of architects, planners, and engineers in the planning process under the bureaucratised capitalism and social-democratic engineering of the present society, and the potential role such professionals might play in the development of egalitarian and liveable cities in which “the urban fabric must become the creation of the whole population” (p.22).
"Although written in the mid-1970s, and drawing its examples from the development of urban areas in Britain up to that time, the analysis reflects general trends of urban development elsewhere, trends continuing into the present day.
"Writing under the name of James Finlayson, the author of this pamphlet was George Williamson (1939-2007), political activist, architect by profession, and Solidarity member for many years.
"Finlayson’s general “framework of libertarian ideas” reflects the influence of Cornelius Castoriadis, many of whose writings were translated from the French by prominent Solidarity member, Chris Pallis (aka Maurice Brinton), and published as Solidarity pamphlets under the name of Paul Cardan."
Posted by Radical History Network (RaHN) at 12:53 PM No comments: Links to this post