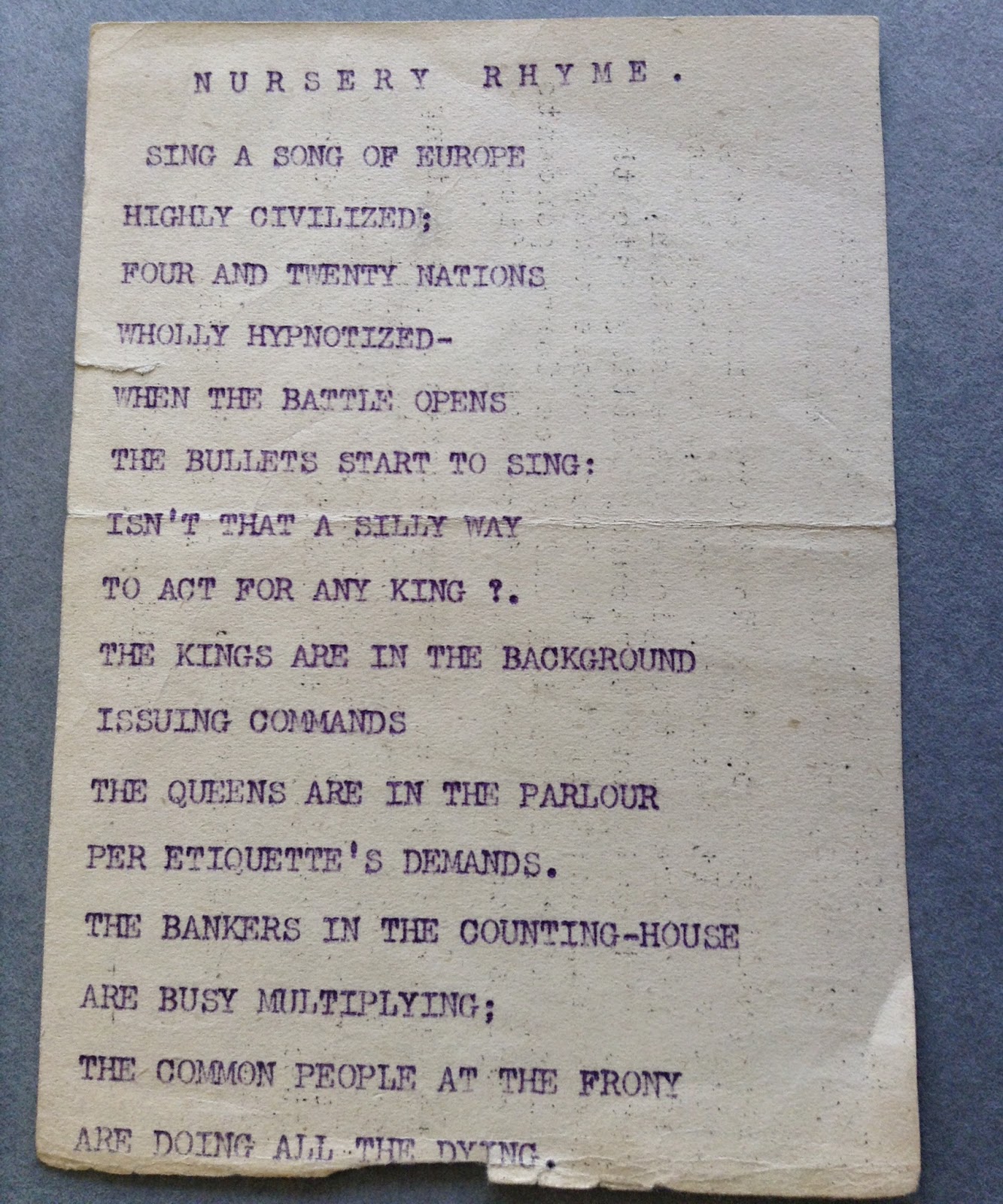 SING A SONG OF EUROPE


HIGHLY CIVILISED;
FOUR AND TWENTY NATIONS
WHOLLY HYPNOTISED –
WHEN THE BATTLE OPENS
THE BULLETS START TO SING:
ISN’T THAT A SILLY WAY
TO ACT FOR ANY KING?
THE KINGS ARE IN THE BACKGROUND
ISSUING COMMANDS
THE QUEENS ARE IN THE PARLOUR
PER ETIQUETTE’S DEMANDS.
THE BANKERS IN THE COUNTING-HOUSE
ARE BUSY MULTIPLYING;
THE COMMON PEOPLE AT THE FRONT
ARE DOING ALL THE DYING.


Thanks for this (and the satirical ‘If’ parody below), to Alison Ronan, who found it in the papers of a local Manchester Conscientious Objector, Arthur Turtle.
Ali is a feminist historian interested in dissent and resistance. Her current research is about anti-war and pacifist women in Manchester and North-West England, 1914-1918.
Her book 'A Small Vital Flame: anti-war women in NW England 1914-1918’ is published by The Scholars' Press. 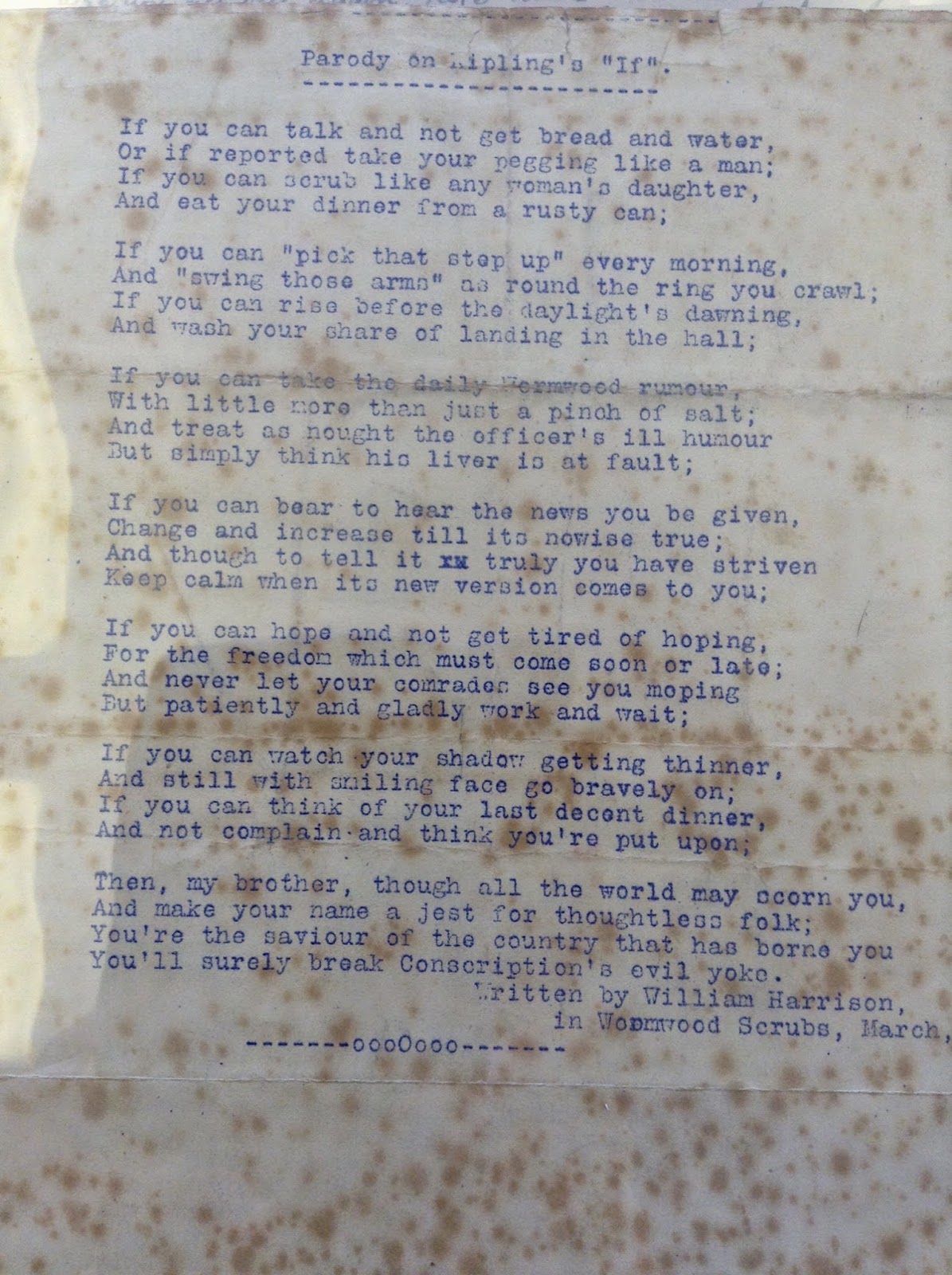 (A Pacifist’s Parody on Kipling’s “If”)

If you can talk and not get bread and water,

And eat your dinner from a rusty can;

If you can “pick that step up” every morning,

And “swing those arms” as round the ring you crawl;

If you can rise before the daylight’s dawning,

And wash your share of landing in the hall;

If you can take the daily Wormwood rumour,

With little more than just a pinch of salt;

And treat as nought the officer’s ill-humour,

But simply think his liver is at fault;

If you can bear to hear the news you be given,

And though to tell it truly you have striven,

Keep calm when its new version comes to you;

If you can hope and not get tired of hoping,

For the freedom which must come soon or late;

And never let your comrades see you hoping,

But patiently and gladly work and wait;

If you can watch your shadow getting thinner,

And still with smiling face go bravely on;

If you can think of your last decent dinner,

And not complain and think you’re put upon;

Then, my brother, though all the world may scorn you,

And make your name a jest for thoughtless folk;

You’re the saviour of the country that has borne you,


An online search finds inter alia that the nursery rhyme was published anonymously in: THE IRON WORKER Vol.1 No 4 1928, but the 'If'' parody does not appear to have been widely distributed, if at all.(The fact that this page looks as though it was produced on a duplicator, however, suggests an attempt to make it more widely known, at some point.) See comment below with reference to William Harrison.
Posted by Radical History Network (RaHN) at 10:31 AM