(Just opposite the Civic Centre on the High Road, at the start of White Hart Lane, 50 yards from the main road. A 100 yard walk from the bus stop at Wood Green tube station, past the Wood Green bus depot) 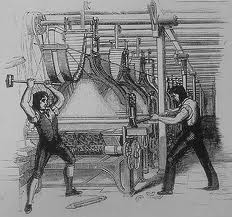 We are celebrating that it is exactly 200 years since the clothing workers in northern counties who had tried talking to employers and politicians, were finally forced disguise themselves, take large hammers [Enochs – there is a picture of one on the blog] and start breaking up the new machines that had destroyed hundreds of jobs. They were not opposed to technology as such just machines that were crushing their livelihoods. After a brave revolt, that scared the ruling class, they failed and we know today that destruction does not work. Now we have to consider other methods for the widespread introduction of technology that threatens millions of jobs. Dockers, printers, and others have seen jobs eaten by new inventions and millions of others less publicised, are under threat. Today many think in terms of occupation of premises, property and equipment, to control their use and ensure production is for social need, not just profit.

What is a Luddite?
The Luddites, armed with hammers, pistols and a desperation to protect their livelihoods, seized the imagination of the British public in the early-nineteenth century. And they have held on to it. Two centuries later, the word 'Luddite' is still familiar all round the English-speaking world, though our rulers have ensured it is a byword for negative action.

History and events
Machine breaking as a form of protest had been happening in England since at least the late-seventeenth century. It gained momentum in the 1790s and again in the early 1800s, when framework knitters in Nottingham, angry at the prospect of wage cuts, took hammers to their machines. They remembered the name of a Leicestershire lad, named Ludlam maybe, who had smashed a machine in a fit of pique, and from him came the semi-mythical figure of General Ludd, in whose name the protests were said to take place. Machine-breaking also spread to the cotton industry of Lancashire and Cheshire, but it was in Yorkshire that the most disturbing and ultimately poignant drama was played out. The violent events of 1812 in the West Riding of Yorkshire, leading to a string of executions in January 1813, have been told and retold ever since by historians, novelists and playwrights

Repression
Those in authority were determined to crush the revolt from below. There was no right to vote anyway, and a massive army was assembled, more men than were used against their mortal enemy, Napoleon Bonaparte in Spain, to force obedience. Some of the mills were fortified and pitched battles followed, people were killed on both sides. Hundreds of spies were sent into the villages but for months silence ruled . Then by deception some names were gathered, arrests made, terror ruled in the community. After what passed for a ‘trial’ 14 were sentenced and hanged. Many more were transported to penal colonies in Australia.

People involved
The key characters in West Riding Luddism were tradesmen known as croppers, who needed great skill and strength to manipulate enormous shears with which they smoothed the surface of the woollen cloth produced in the weavers' cottages that dotted the hills and villages. But a machine was invented that could shear cloth much more efficiently and some of the new breed of Yorkshire manufacturers were installing this latest technology in their factories, which were bringing all the processes of cloth production under one roof. The consequences of this change forced the revolt, which brave though it was, was doomed by the massive use of arms.

Luddism has become a title, worn with reluctance but bravery, by workers defending their livlhood agaianst capitalist ‘Progress’ and politcal indifference. We have tried the political parties and the so called law and now we must fall back on ourselves and our organisation to occupy. We remember the Luddites with pride
Posted by Radical History Network (RaHN) at 10:53 PM