September 2010 brings the fiftieth anniversary of the death of Sylvia Pankhurst. Her surname is inevitably associated first and foremost with the Suffragette movement, the militant campaign for votes for women in the early 20th century, and she was certainly active and prominent in that, repeatedly risking health and liberty in the cause. But her determination to act on her principles led her into involvement in many other areas of equal or more interest to radical historians, including syndicalism, anarchism, soviet communism, peace campaigning and anti-fascism.

Sylvia Pankhurst grew up in the early stages of the British political labour movement, in a household on close terms with some of its key elements – Fabians, Independent Labour Party (ILP) – and stood by the ideas she absorbed. Eventually she was to take them much further, and in rather different directions. She became a close friend of Keir Hardie, whom she called in an obituary (1915) the ‘greatest human being of our time’.
In 1907 she undertook a tour of parts of Britain, with the aim of making a visual record in paintings of working women; she had given up her studies in art to work for the Women’s Social and Political Union (WSPU). Despite her social awareness she was not prepared for the scenes of hardship she found and heard about from the women themselves: in industry - pit-brow, textiles, potteries; on quays packing and gutting North Sea herring; doing agricultural labour in Berwickshire.

A few years later her travels extended to the USA, in the first three months of 1911and 1912, primarily for the suffrage movement but not confined to that. She noted the ‘squalid poverty’ of new immigrants in the ‘nightmare industrialisation’ of Pittsburgh, incurred hostile criticism by agreeing to speak at the Negro University of Tennessee, and Insisted on seeing prisons, as well as Nashville sawmills and a blanket factory. Such observations confirmed her misgivings about single-issue politics and elitism. 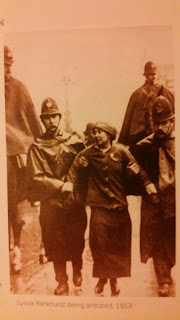 Nevertheless in 1913-14 Sylvia the Suffragette was arrested numerous times and suffered the torture of forcible feeding under the notorious ‘Cat and Mouse’ Act. She continued to speak and work for the WSPU, but was against the sort of ‘stealthy act of destruction’ (arson) ordered by her sister Christabel.

Sylvia and her allies took their struggle into a new area and a new phase In 1913, with what became the East London Federation of Suffragettes (ELFS), its agenda being to increase support both for women’s right to vote and for socialist ideas, while putting the latter into practice in meaningful ways. Their organisation was democratic and inclusive (men were welcome too, George Lansbury being a close associate). Elections and decisions like choosing the name of the weekly newspaper, The Woman’s Dreadnought, were by majority vote, at meetings held twice-weekly in afternoons and evenings so that more people might attend. The paper sold for a halfpenny but was distributed free when 4 days old. East Enders were encouraged to contribute, and training was arranged for speakers. Propaganda by word was accompanied by deeds of practical help, not all one way. East Enders rallied round not only to assist with the work but to help against the police by improvising a ‘People’s Army’ to defend themselves and fight off arresting officers.

Large demonstrations and rallies were held. In the turbulent year of 1913 Sylvia supported industrial militancy, in which syndicalism was a major element. She spoke at a mass rally in support of victims of police brutality and of a vicious lock-out of striking workers in Ireland, and at an Albert Hall meeting in protest at government treatment of British syndicalist leaders following strikes in coal and transport. Just before the First World War began she went to Ireland to investigate the trouble there.

Also in the last weeks of peace successive approaches and direct action led to a deputation from the EFLS at last being seen by Prime Minister Asquith, who found their presentation ‘moderate & well-reasoned’, and agreed that votes for women must be on the same terms as for men. But any progress towards electoral reform was shortly to be put on hold for the duration, as was the mainstream WSPU campaign (with a war-mongering vengeance).

What She Did in the War

As in internationalist in both feminist and socialist modes Sylvia combatted the rising tide of ultra-patriotism by writing hundreds of letters and articles, leading deputations and organising protest marches. When the conflict became prolonged and its effects more devastating she fought against the deterioration of living standards in the East End and the attacks on civil liberties (conscription, Defence of the Realm). Material help was provided by her team via centres for milk distribution, mother and baby clinics, a toy factory and a cost-price restaurant. At the same time she participated in the villified anti-war movement at home and in Europe. Significant actions were undertaken on behalf soldiers’ and sailors’ dependants and in exposing the unequal availability of food.

In March 1916 the ELFS was rebranded as the Workers' Suffrage Federation (WSF), and its newspaper retitled The Workers' Dreadnought (WD),this being democratically agreed and minuted like all decisions. It published letters exposing what was happening in France, gathering information on executions at the front and accounts of brutal punishments, and carried an eye-witness reported of the 1916 Irish Easter Rising. Siegfried Sassoon’s classic statement against the war was published in WD in July 1917. The premises were raided after a call to troops to desert, and later two issues of the paper were suppressed, in October and November 1917. Those dates will ring a loud Russian bell.

Notwithstanding her self-sacrifice for the sake of the vote, Sylvia had turned away from party politics and belief in parliamentary government and towards other roads to socialism; she declined nomination as a Socialist candidate, observing with reference to the long-awaited Bill that gave women (aged 30) the vote: ‘The profound divergences of opinion on war and peace had been shown to know no sex.’ (She later commented: ‘The woman professional politician is neither more nor less desirable than the man.’) The WSF declared itself for International Socialism and the overthrow of capitalism and the Russian Revolution seemed to offer hope, to the extent that Sylvia was seen as a leading pro-Bolshevik. In May 1919 she appeared at Trafalgar Square with Tom Mann and Guy Aldred, urging soldiers to refuse to go to Russia, and she supported Harry Pollitt’s agitation in the docks to prevent ships being loaded with arms for counter-revolutionary intervention.

Meanwhile she articulated her own vision of soviets as the ‘most democratic form of government yet established’ - this meant ‘social soviets’ to involve the entire working class, in living areas as well as the workplace; thus the soviet principle would be shown to work for women. Delegates would constantly report back and get instructions from those who elected them.

The WSF was the first British group to affiliate with the 3rd International and Sylvia, by then a founder member of the Communist Party of Great Britain (CPGB) travelled to its 2nd Congress in Moscow (with Willie Gallacher of Red Clydeside fame) after some correspondence with Lenin. They differed, ironically, on the point of the ‘parliamentary road’ which Lenin thought should not be excluded as an option for British comrades, but she was for a time happy to accept some of the now-legendary ‘Moscow gold’ in the form of subsidies. On her return one of her most damaging terms of imprisonment ensued, this time for sedition after the publication of an ‘incitement to naval mutiny’, ‘Discontent on the lower deck’, in October 1920.
Sylvia broke with the unified CPGB (at one time there were two or three) over issues of censorship and control of the paper (WD), having criticised Lenin for ‘abandoning the cause of emancipation of the workers’ with the New Economic Policy, and regretting that there was no sign of dictatorship withering in the USSR.

The Anarchist Connection and Anti-Fascism
Earlier, translations of Lenin had been done for the Workers’ Dreadnought by an Italian anarchist writer, researcher and typographer, Silvio Corio, said to have been influenced by Errico Malatesta (see Black Flag No.231, mid-2010, pp. 36-38) and associated with the Italian anarchist exile scene in London. The WD ceased publication in 1924 but the association continued – Silvio and Sylvia lived together for about 30 years. Their son Richard was born in 1927, to a 45-year-old mother determined to remain unmarried and to let her son grow as a ‘free baby’ who ‘should be a free man’.

In the course of the next few years of intensive writing combined with child-rearing, Sylvia became preoccupied with the danger of fascism, highlighted by reports from Italy and contacts among refugees. She was active on behalf of the Women’s International Matteoti Committee which succeeded eventually in securing the release of the murdered socialist deputy’s widow, arranged for aid to be sent to detainees and participated in the 1933 Day of Protest for victims of Italian fascism. Acting against the home-grown variety too, she was hit by a stone at Cable Street (1936).

Mussolini’s attack on Ethiopia brought these concerns to a new pitch of urgency and sparked off a wave of protest calling for sanctions and for the League of Nations to support the Emperor Haile Selassie in resistance. Sylvia started a weekly paper, The New Times and Ethiopia News, which continued until the mid 1950s, proclaiming that ‘the cause of Ethiopia cannot be divided from the cause of international justice’ and exposing the racism inherent in the lack of response: ‘The great betrayal of today is excused by the thought that liberty and justice for an African people do not matter’ (11-7-36).

In September 1939, the sub-title ‘The National Anti-Fascist Weekly’ was added to the masthead. In contrast to her stance in the First World War Sylvia was now an advocate for complete military victory against the Axis powers, although her own war effort was peaceable and consistent with her earlier work: trying to protect the living standards of working-class families and to get anti-fascists released from internment, assisting the Jewish Refugees Committee. She received death threats and was given police protection, while Silvio Corio broadcast a call to Italian workers on the BBC. Not that they had gone over to the side of the authorities: Sylvia kept up her criticism of British policy after the Italians were got out of Ethiopia in 1941, seeing a need for its ‘liberation from its liberators’. In 1942 she visited the country, where she was welcomed with honours and found a street in Addis Ababa named after her.

Her continuing commitment to the idea of a thriving independent Ethiopia made her something of a proxy-patriot-in-exile, if not a selective imperialist, after the war – and kept her on the Foreign Office radar as a permanent irritant, so not all bad. She was still opposed to conscription and colonialism, and declared ‘Women’s great work today is peace. And they are not doing it.’ The last issue of the New Times appeared in May 1956; in July 1956, two and a half years after Silvio’s death, Sylvia and their son left for a new life in Ethiopia. Provided with a comfortable household, she settled in and embarked on yet another programme of fund-raising and organising to improve conditions, especially in relation to health and medicine, until her death.
There are worse ways to sell out, if her end-of-life be so considered. Her life as a whole provides many good reasons why she should be remembered.
L.W.
September 2010

Sources for the above