Haringey Solidarity Group - some activities past and present [1990-2005] 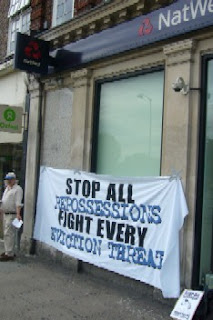 In an attempt to look forward at where HSG fits into any political strategy in Haringey, we first thought we would look back. So, here is a look at what we have done over the last 15 years based on the minutes of our monthly meetings. The information is huge, so this can be no more than a brief and a bit chaotic look. I have tried not to see things as “successes” or “failures”. Where one person will see failure, another will see success. And vise versa.

The obvious place to start, as it was the forerunner of HSG, was the anti Poll Tax Campaign. Much has been talked about this campaign [see our booklet], so I won’t say much. However, we were one of the only local anti Poll Tax groups who stayed together after the defeat of the poll tax. This was a very positive decision. It’s a shame more groups didn’t do likewise. If they had, maybe……. In 1998 we played a large role in organising a national gathering in Bradford, and more recently the local groups Community Action. If the 100 or so anti poll tax groups around London had formed into independent community action/solidarity groups back in 1990 maybe we wouldn’t be reinventing the wheel as we seem to be doing. But, hey, we live and learn…

In April 1991 we had the first meeting as Haringey Solidarity Group and by January 1992 we had formed three separate groups around the borough in Tottenham, Green Lanes, and Wood Green. Not being able to sustain three separate groups we all came back together as HSG in September 1994. I have attached the first (and present) set of aims and principles of HSG. In 1991 we had sub groups of HSG for: the environment; housing; publicity; transport; women; anti racism; industrial; police monitoring; council monitoring; and disability issues. There were something like 30/40 active people though. In the early days we were using an office in West Green Road. Later 1997 we opened up our own office just of Green Lanes, which we have just decided to give up due to the costs involved..

Looking back it’s ironic to see present day issues cropping up. In 1993 we were campaigning (and won) against the council taking parts of our parks for financial gain. In 1994 we were already trying to stop the slow invasion of Controlled Parking Zones and Red Routes. And in 1995 we talked about the future of the Independent Working Class Association (IWCA), which the Hackney Independent group has recently formed out of. Then there is the continual racist attacks we have been a small part in trying to fight: Broadwater Farm Defence Campaign; Tottenham Three Campaign; Joy Gardner, Michael Menson, Roger Sylvester, Winston Silcott Campaign, and most recently the police harassment of Delroy & Sonya Lindo and their family. After 15 years: same harassment different targets. But, at least we have been there to help where we can, sometimes in fairly minor ways.

We have always tried to support other struggles and all we can do here is name a few. If anybody wants more detail just ask. We have supported workers in struggle for the last 15 years where we can. There has been the Arnaouti bakery workers; council workers; postal workers; Building Workers Group; Hillingdon workers; Liverpool Dockers; and of course one of the major campaigns we were involved in the JJ Fast Food workers dispute in Tottenham (see booklet on this for fuller details).

There have been dozens of campaigns we have been part of as well. As a flavour some are: anti MacDonald’s campaign, endless campaigns and demos against Council cuts, campaigning against harassment of local prostitutes, fighting the 1996 Asylum Bill (Act), against the Private Finance Imitative (PFI), campaigning against the unsustainable redevelopment of the Hornsey Waterworks; anti-war / anti-arms trade stuff; going down to Newbury to support the road protestors; helping set up a Haringey Squatters Group; being par of the group in the 1990s who were fighting the Council’s plans to privatize Alexandra Palace and it’s parklands; police monitoring and publicity; trying to help and support other groups around London and the UK who wanted to form HSG type groups; The campaign against the Child Support Agency in 1993/4; supporting the setting up of the Haringey Furniture Project; and putting teams in for a London wide 7 a side football competition.

There have also been a number of campaigns we have started and run in Haringey (sometimes linking up with other groups to form London or nationwide campaigns). Again, because of space, I will be brief. We had a very active claimants group which not only campaigned against the JSA, New Deal and Project work, but for better conditions for workers in job centres. We were linked with other groups to form the nationwide Groundswell claimants network. We met nationally for 2 or 3 years and organised two large London demos. This was one of the first times we had managed to link claimants and job centre workers in one campaign.

We worked with lecturers and students at the College of North East London in Tottenham to fight both cuts to the college and attacks on staff conditions. Linking staff and students was an important part of this one that came from them not us. Tottenham Law Centre was threatened with closure by Haringey Council. Because of our links with the local community we help over a year or so to fight this closure. Without HSG the campaign wouldn’t have been as effective. In 1995 we were part of a larger Haringey campaign to Fight Against Cuts in Education. Again, we linked with other groups around the borough. We were instrumental in planning & calling the initial meeting of a Haringey Anti Racist Group after a number of racist incidents in Haringey. We planned the meeting (with others and secured the venue so those attending felt safe. Unfortunately this group declined quickly once they sought respectability and became the Haringey Anti Racist Alliance, elected steering committees and wanted a lot of council input. It became no more than a talking shop and soon collapsed.

We campaigned against the destruction of some of Downhills Park to make way for private football pitches which would then be hired back out to the people of Tottenham. And we won this one. We were instrumental in starting and part running the Haringey Local Exchange & Trading Scheme (LETS). This worked independently for a few years but eventually joined the larger North London LETS, as numbers were falling. We started a local anti-advertising campaign, campaigning to get billboards removed whilst encouraging 'subvertising' of them. We have continually, over the last 15 years, campaigned against elections both locally and nationally, by trying to leaflet flypost and inform people as to their pointlessness. Each time we tried to use the opportunity to show local people there is a different, and in our view, better way of organizing their lives and communities.

In 2002 we held a week of events around Mayday week. This included stalls, leafleting and a highly successful local Mayday conference. This included producing 15,000 copies of a new free local paper. We've also publicised and taken part in many London Mayday events and national anti-capitalist / anti-G8 protests, and many other countrywide events and initiatives. Every year we do a national mailout to similar local radical groups and centres to encourage better communication and co-operation.

Five years ago some members of HSG came together to form a housing co-op. Although they still do not have housing, the group have stayed together and tried continuously to find land in Tottenham to build a housing co-op and community space. Most recently, it was HSG who initiated the Haringey Against ID Cards campaign, by calling the first public meeting of the group in Tottenham. Some of us are involved in local residents' associations and the group has been able to support them and the Haringey Federation of Residents Associations.

Just a few of the other things I can think of in no particular order were. Women within HSG formed a successful women’s group for 2 or 3 years. We also formed a men’s group to challenge our attitudes as men and look at claims of oppression and overbearing within HSG. This group didn’t last very long! Michael Portillo dared to have a party to celebrate him being a politician for 10 years in Haringey (at Alexandra Palace). After some fierce campaigning work we got a large noisy crowd to the event. The party was “spoiled” for a lot of those attending as the crowd threw eggs, flour, tomatos and more at those attending. Gordon Brown also attended a meeting in Wood Green and was met with customary eggs and stuff. Oh the good old days! And loads of us raised money for the group by working behind bars at festivals. Money which we used to pay for everything we did and also managed to donate to a lot of other groups who needed it including setting up a 'bust fund' to support any Haringey activists arrested.

Throughout the last 15 years there has been one thing consistent within HSG, although this ebbs and flows depending on how strong the group is. That is our solidarity work and propaganda. HSG has produced dozens of leaflets and posters in huge quantities. We must have produced at least 10,000 posters and 100s of 1000s of leaflets on a huge variety of issues. We have regularly been on street corners, at festivals, going door to door giving out this literature. On top of this we have had two regular newsletters “Haringey Community Action” and “The Haringey Independent”. The former got up to 12 pages and 12,000 copies four times a year. There was also a newletter called “Tottenham Free” but before HSG’s time.

We have consistently put up posters all around the borough informing people about a number of issues and generally rabble rousing. Whenever we have heard of racist or fascist graffiti or posters they been removed very quickly. Over the years we have run many stalls, and at our height we had a telephone tree of 40 people so we could react to issues immediately. And every month without fail we mail out our minutes and a range of independent local and national literature to all local residents on our mailing list (currently 120). Lastly the office and our PO Box have come to the rescue of many a group. The office had been used by a number of other groups, as has our telephone, photocopier and postal address.
Posted by Radical History Network (RaHN) at 6:05 AM