Join us to celebrate her life with an unveiling of a new plaque; an introductory talk on Priscilla Wakefield outlining her many achievements and a talk by Susan Johnson of the University of Bath: Reflections on feminism and microfinance.

The exhibition will present material uncovered in Haringey and beyond over the course of our research into the Gestetner machine and factory, including zines, independent publications, duplicated newspapers, political pamphlets and a host of office material. These artefacts will be displayed alongside the fantastic Gestetner factory archives held at Bruce Castle Museum and Haringey Archive.

Alt Går Bra will show its mimeographed books, publications and prints, along with newly produced work for this exhibition. www.altgarbra.org

Featuring over 100 artefacts uncovered from Haringey and beyond, the exhibition explores the Gestetner machine as a device that revolutionised the office. It also reveals how the machines were put to alternative use, enabling a wave of political activists, artists and writers to produce printed publications quickly, affordably and with relative ease.

The Gestetner factory stood in Tottenham for over 80 years as a major employer in Haringey, fast becoming the largest duplicating factory in the world. Duplicators provided an efficient and labour-saving way for offices to organise and circulate increasing amounts of information. These versatile machines were also at the heart of small organisations, schools and churches, used to provide information to the community in the form of bulletins, pamphlets and letters.

The exhibition will present material from Bruce Castle Museum and Haringey Archive along with fanzines, political publications, and Alt Går Bra’s own mimeographic works.

Bruce Castle Museum and Haringey Archive’s collection of Gestetner artefacts include the fantastically illustrated house publications, which record the life of the factory in the 1950s and 1960s underscoring the companies close roots to Tottenham.

The exhibition will also feature material displayed for the first time as a collection: duplicated fanzines and alternative publications from the 1930s - 1980s. These amateur publications demonstrate the high level of creativity that was achieved with stencilling, as well as the extent to which duplicating technology enabled marginal groups to network and exchange ideas. This ability to self-publish is beautifully reflected in the host of newspapers and scouting publications on display.

Political pamphlets focus on the Gestetner’s potential to spread information outside the mainstream printing industry, leading to a number of political organisations to adopt the machines. Duplicated material by the Committee of 100 and the Hornsey and Wood Green Labour Party illustrate this aspect. The Gestetner as a clandestine printing device is seen in the pamphlets by the Spies for Peace group, exposing the government's secret plans to run the country in the case of nuclear war.

The exhibition will include a retrospective of Alt Går Bra’s mimeographed works over the last four years. This section of the exhibition will center on Alt Går Bra’s book ​The Mimeograph, A Tool for Radical Art and Political Contestation , a compilation of texts by contemporary scholars worldwide dedicated to mimeography and the first known publication dedicated to mimeographic works. ​Alt Går Bra will show its mimeographed books, publications and prints, along with newly produced work for this exhibition.

An events programme will run alongside the exhibition, including an oral history walk around the former factory site and a series of Gestetner duplicator workshops.

Alt Går Bra is an art and research group exploring the intersections between art and politics through exhibitions and publications.

Posted by Radical History Network (RaHN) at 11:24 AM No comments: Links to this post

New series of talks on the Long 1960s

Through a monthly series of public discussions, to be held in central London from September 2018 to June 2019, we hope to get beyond the usual famous figures to the “social history” that propelled them; that is, history as made and lived by the masses of ordinary people who entered the political stage in collective struggle.

Each session will be opened by historians or direct participants, whose research as academics and experience as militants gives them a unique perspective on the events we will discuss.

But these are not academic lectures; nor do the talks uphold any particular political or party “line”. The majority of each session will be given over to open debate, and we encourage people of all ages, backgrounds, and experience to attend, participate, and contribute. Through collective and equal discussion, we hope to reach a deeper understanding of revolution as the active participation of millions of people in changing history.

Registration for each session will open one month prior to the event. Follow our Facebook page for updates or see our website for more details.
The discussion will usually (but not always) be held monthly at 6.30 pm, in central London, on a Tuesday or Thursday – although note that the first session is on a Monday! See below for confirmed sessions. We hope to see you there!

Other confirmed speakers (dates to be confirmed soon):
Enquiries to: thelong1960s@gmail.com
The talks are co-hosted by the organising committee of last year’s highly successful Social Histories of the Russian Revolution and  Haymarket Books, a radical publisher of political literature.

Posted by Radical History Network (RaHN) at 10:57 AM No comments: Links to this post 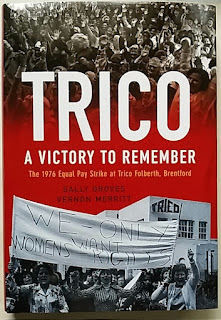 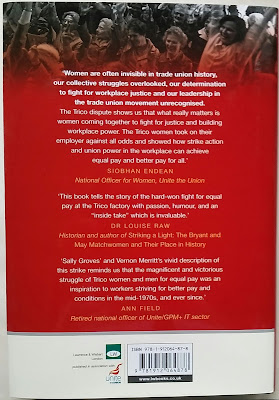 From the publishers:
This is the remarkable story, still relevant today, of four hundred women and their supporters who, in 1976, went on strike for 21 weeks to win equal pay with their male counterparts. It took place at the Brentford plant of Trico-Folberth, an American multinational producer of windscreen wipers. The strike was trail-blazing in many ways, and was essential to making women’s rights a central focus for the labour movement in the UK, a major turning point of the 1970s. Trico: A Victory to Remember is indispensable to understanding that shift. Illustrated with stunning archive photos mostly unseen for over forty years, the book charts the women’s campaign to their final victory, including anecdotes from some of those involved.
**************
Sally Groves and Vernon Merritt, Trico: A Victory to Remember. The 1976 Equal Pay Strike at Trico Folberth, Brentford. Lawrence & Wishart with Unite the Union, 2018.

This account of the "longest successful strike for equal pay in British Trade Union history" is presented in an attractive and readable form. Sections of reportage and commentary are interspersed with pages of direct quotations, clearly differentiated and attributed, from several of those involved. Many excellent illustrations bring out both the collective experience and the individuality of the women in their struggle. Discreet footnotes (or side-notes) fill out extra bits of background and history.


A Foreword written by the first author in 1977 summarises what these "400 or so very remarkable women" did and why, and what happened as a resut. Strike action was taken in May 1976 when women being paid less than men doing identical work walked out - after "months of frustrating and non-productive negotiations" aimed at persuading a recalcitrant management to fulfil its obligations under the Equal pay Act (which had itself given employers five years to prepare). Three weeks into the action, the strike was made official by the then AUEW; the factory produced items for the motor industry, mostly windscreen wipers and related accessories. A minority of the male workers, about 150, joined the strike, which was to last for 21 weeks, prolonged by "unbelievably incompetent company policy" which caused considerably hardship but at the same time strengthened solidarity and support. Management tactics included hiring transport gangs to smash through picket lines in convoy. Settlement was reached in mid-October, when a mass meeting was told that equal pay had been agreed. The triumphant return to work followed three days later.


Details of incidents, personalities and day-to-day organisation are given in the three parts: "Getting organised", "The battle rages", and "The reckoning", each containing numerous subheadings. Part 1 describes the background of a workforce drawn mostly from nearby council estates, so that, importantly, many of the women were known to each other or related. Labour was segregated by gender, men on the night shift and in "craft" jobs; adjustments led to the few men on the washer assembly line being paid £6.50 per week more than the women. Spontaneous stoppages had occurred in February when shop stewards "restored order". Things were made worse by a "series of phony excuses" including conformity with the (Labout) government's pay policy (wage restraint) and by "hamfisted handling" of grievances, as British managers adopted the methods and "blackmailing tactics" of their American employers.

Part 2 launches into the developing struggle, featuring “Strike breakers incorporated”, “They shall not pass”, and “Battle at the Trico gates” while throughout, the activists' own take on events adds another dimension under a great variety of headings such as Picketing and solidarity, Surveillance, Growth of political awareness, Strike breaking, Sexist attitudes and many more. Despite problems, obstacles and risks it was evidently far from an unremittingly grim experience on  Costa del Trico in that famously hot summer, as many pictures show. Methods included strike bulletins with cartoons (to counter the inevitable press hostility and bias), meetings in nearby Boston Manor Park, with entertainment, and a protest delegation to Brentford police station about police complicity with strike-breakers. They had lots of fine days for it for a time at least. Part 3 continues with “More determined than ever”, “Tribunal trickery” plus the wider picture of outside support being sought and organised and the union involvement, and finally “Victory!”

This is followed by an analysis-with-hindsight and assessment of contemporary relevance in "Forty years on - what lessons for today?" including a comparison with Grunwick, and an overview of campaigning for equal pay, "Fighting for our rights". Lastly there is an obituary for Eileen Ward, one of the foremost activists.


The winning formula was, in the authorial view, the “power of direct action backed up by the organised muscle of a strong trade union connection”. Valid perhaps in this sort of context (implementation of reform enacted by legislation), but the point is not lost that it was the women’s own decisiveness and determination that both instigated and sustained the struggle. While it may be difficult in the conditions of 2018 wholly to endorse or revert to the optimism and triumph that are the prevailing mode of the book, it reminds us that such a struggle can be both upbeat along the way and effective in the long run.

The Trico factory closed in 1994, with most of the workforce becoming redundant, and different buildings occupying the site, so that in a way these events may appear all to belong in the past. Nevertheless the subject's significance remains as a bit of labour history that should not be forgotten as well as concerning a vital issue still far from resolved. This very worthwhile publication does an excellent job of helping to preserve it in collective memory.

Posted by Radical History Network (RaHN) at 1:28 PM 3 comments: Links to this post