“Eyewitnesses of the origins of the British Revolution” – October 1968

With the 50th anniversary of the start of the 1967-68 academic year looming, and the world again (still?) worried by American government war-mongering, it seems a good enough time to look back at the heady days of student and (let’s not forget) other militancy which to some gave real hope, as in this letter written in the immediate aftermath of a large anti-Vietnam-war demonstration in London.
It gives a rather different account from that currently available in mainstream sources, as well as from that provided by the media at the time – no surprises there. Whatever reservations we, and no doubt its writer, may have - especially with half a century of hindsight - about its tone, analysis and (obviously) predictions, it stands as a spontaneous testimony to "what it was like" back then. Or what it could be like on a good day. And might even be like again?

1. A massive show of support for the Vietnamese against the Americans. 3½  times as many were mobilised on Victory to the NLF as on the Geneva/U Thant [UN Secretary General] old-style demos. The links between the struggle here and in Vietnam were emphasised.

2. Unmasking of the apparatus. The press, media, government, police, banks and big business were all seen to be the enemies by their common reaction of fear to the demo, their lies and slanders prior to it and their precautions to safeguard their property during it. The apparatus was not only unmasked - it was ridiculed. Our power on the streets ridiculed their strength, and our revolutionary self-discipline ridiculed their fears.

3. Beginning of a movement of social change in Britain. Everybody on that demo now knows he or she has 50,000 comrades, with whom the city has been occupied, the ruling class exposed and a blow struck against Imperialism. Few people did not find the demo exhilarating, and a great encouragement. This cannot be the end, only the beginning. Every one there was ready for violence; if the police had engaged in the slightest provocation at any point, there would undoubtedly have been an uprising of some dimensions. As it was the march achieved everything it set out to do as outlined above and any insurrection was really irrelevant at this stage.

Met Chris Pallis, had a long discussion with him about joining 'Solidarity', about Marxism, demystification (him) & human irrationality (me). He bought me a half pint. I've decided to join the group nationally and so has [another Aberdonian]...

P S. Keep this - we'll publish a book, “Eyewitnesses of the origins of the British Revolution...”

Note: "Victory to the NLF " was not the sort of slogan that found favour with Solidarity.
See Solidarity Pamphlet 43 and numerous articles in the magazine. 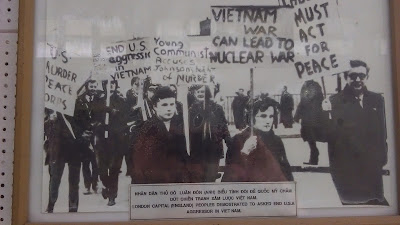 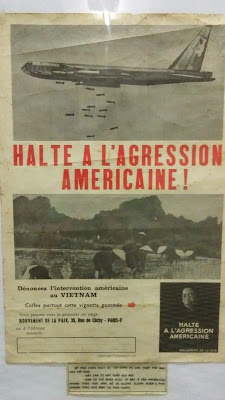 Photographs from a museum
in Vietnam, July 2017 (MFW)
Posted by Radical History Network (RaHN) at 10:38 AM 1 comment: Links to this post