Next meeting of the Radical History Network of North East London


In October 1912 Sylvia Pankhurst climbed onto a wooden platform outside an old baker's shop on Bow Road, and painted the words 'VOTES FOR WOMEN' in golden letters above the door. What began as a simple recruitment drive for the Women’s Social and Political Union soon sparked a rebellion in the suffragette ranks, and launched a mass movement for equality in the East End. 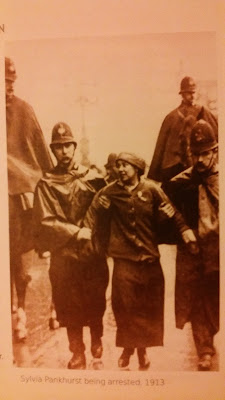 Our meeting will look at Sylvia Pankhurst’s life and legacy – both in London and internationally.
Speakers
Sarah Jackson is co-author of 'Voices From History: East London Suffragettes' and co-founder of the East End Women's Museum - www.eastendwomensmuseum.org
Geoffrey Bell is the author of the recently published 'Hesitant Comrades - The Irish Revolution and the British Labour Movement', described by one reviewer as “a fine example of politically committed scholarship”, and by another as “this fascinating book”. Bell has also written a recent article in 'History Ireland' on Sylvia Pankhurst and Ireland's 1916 Rising and its aftermath.
Plus discussion:

Free to attend, all welcome.

Posted by Radical History Network (RaHN) at 11:38 AM