Great Enoch - a weapon of choice

'Enoch did make them, Enoch shall break them' 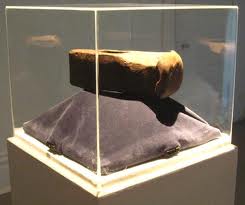 An original hammer head is held in the Matress Factory Museum in Pitts burgh PA, with the unfortunate curator's blurb:


"The vitrine in the centre of the room houses and iron sledgehammer head, specially the common type
referred to as an Enoch Hammer. The tool sits alone ina room dark except for the spotlight on the case Rendered impotent by its treatment as a relic of tiem other than our own, the case is guarded by a security camera on each wall and a proximity-triggered alarm on the case. By rendering this former implement
of rebellion safe in plxiglass box in a quiet and guarded museum, the hammer head itself can in insured
against future inspiration and use."

ITS TIME TO LIBERATE THE HAMMERHEAD!
Posted by Radical History Network (RaHN) at 1:01 PM