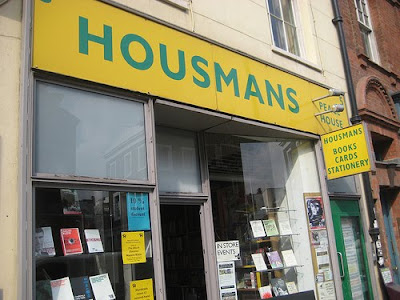 A speaker from the bookshop has been invited.

Wednesday 11 November at 8 p.m.
at The Postman's Office, the North London Community House.
Its address is 22 Moorefield Road, London N17. The venue is just around the corner from Bruce Grove British Rail Station, where Bruce Grove meets the High Road in Tottenham.

We are celebrating the 50th anniversary of the opening of Housman's, at 5 Caledonian Road, N1. The bookshop has its origins in the pacifist movement and takes its name from Laurence Housman, a long-serving officer of the War Resisters International, an organisation which grew from a small committee in 1921 to a body with over 90 groups in 43 countries, plus other networks. The anti-war movement comprises several strands - mainline pacificism, anarchism, socialists, a section of the labour movement, various religious groups - but a crisis developed in the mid 30s over how to deal with the menace of Nazism. Many broke with the pacifist movement believing that a defensive war against invasion and mass executions was justified, including president Fenner Brockway.

On the other hand, the movement for peace - reacting to atrocities in Spain and war in Abyssinia, etc. - grew proportionally. A large mass movement, the Peace Pledge Union, was set up and played a significant role over the next 70 years. Subsequently, the PPU published its new journal Peace News and in 1945 opened its bookshop in Shaftesbury Avenue. This later moved to Finsbury Park. An unexpected donation gave organiser Harry Mister a chance to suggest the purchase of a House/shop for both organisations and 5 Caledonian Road, Peace House, was opened in 1959.

These were dramatic years for those resisting the post war scene. Opposition to nuclear weapons gained ground rapidly both in the conventional CND and more militant Committee of 100. Subsequently the building was used by the Campaign Against the Arms Trade, numerous defence bodies in political trials over Official Secrets and suchlike; the Gay Liberation Front, McLibel Two, London Greenpeace, and many others
too numerous to mention. More recently No Sweat, and the Campaign Against Climate Change are based here, and PN and WRI continue still. It has been central to many dissenting groups .

The bookshop itself has survived while virtually all others, both commercial and political, have closed. As a centre of radical publishing/selling for miscellaneous small-run and minority publications, the shop has an unrivalled stock and reputation. It carries a large number of newspapers, magazines, journals, posters, quarterlies and miscellaneous small goods. No bookshop can carry enough books to satisfy everyone but there exists a wide choice of publication ranging from children's books, items from most of the left and progressive movements, to specialist subjects like music, the environment, and London. The main sections are of course on the peace movement and various socialist and libertarian themes. Customers can expect a rapid service for their orders. A new venture, On Line Books, hopes to establish a base in this growing field of new technology. Every year the Peace Diary, with a world peace directory, appears and sells successfully in this country and overseas.